Headless Body of Arsal Man Found after 'Decapitation by IS' 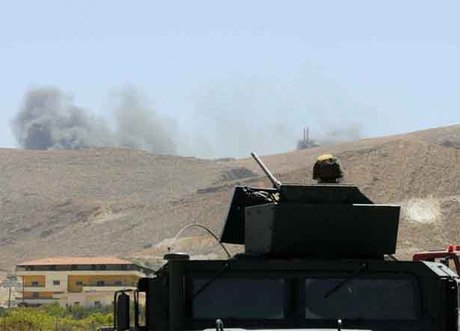 The body of a Arsal resident was found decapitated on Sunday in the outskirts of the northeastern border town, more than two months after he was abducted by Islamic State militants.

“The headless corpse of Lebanese citizen Younis al-Hujeiri, who was kidnapped more than two months ago, has been discovered in Arsal's outskirts,” al-Jadeed television reported.

It said the man was nabbed on January 19 from the Wadi Hmeid area, east of Arsal, at the hands of an armed group.

The militants took him to the town's outskirts and his fate remained unknown until Sunday, the agency added.

Earlier this month, two Syrian gunmen shot dead Lebanese citizen Ali Ezzeddine outside his home in Arsal before speeding away in their car.

Such incidents have become frequent in Arsal in recent years.

The border town hosts thousands of refugees who fled the conflict in neighboring Syria.

Militants from the al-Nusra Front, al-Qaida's Syria branch, and the Islamic State are entrenched in the town's outskirts. In August 2014, they stormed the town and engaged in bloody battles with the Lebanese army.

The situation is still volatile in the town's outskirts amid near-daily clashes between the army and the militants.

Arsal's habitants helped ISIS (which by the way do not exist in Lebanon according to a certain fake doc), by attacking the lebanese army, killing 2 soldiers and even removing theirs eyes 2 years ago and now they are as well victims of Isis.
We do not want to help criminals, let them get what they deserve and then, intervene.

I am a little bit too far from your Raqqa city, boy, oh i was forgetting, i m in Jounieh, you know, the places where your comrade want to behead people

just come, we are all waiting for ya