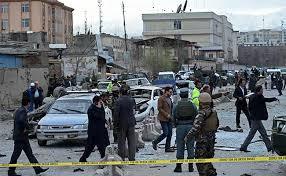 A suicide attacker targeting a prominent Afghan MP killed three people including a child and wounded seven others in Kabul Sunday, officials said, just days after Washington announced it would slow the withdrawal of U.S. troops from Afghanistan.

The Taliban, waging a deadly insurgency since they were ousted from power in late 2001, warned that the announcement would damage any prospects of peace talks as they vowed to continue fighting.

The suicide bomber detonated himself on Sunday evening as Gul Pacha Majidi, a lawmaker from eastern Paktia province, was leaving a meeting of Afghan elders in central Kabul. He escaped with shrapnel wounds to his leg.

"Majidi was attending a jirga (assembly of elders)... and as he was exiting the premises, a suicide attacker on foot detonated himself," the city's police chief Abdul Rahman Rahimi told Agence France-Presse.

"Three people were killed and seven others (excluding the MP) were wounded."

A squad of yellow helmeted firefighters used high-pressure water hoses to douse the smoldering facade of the building as the area was sealed off by Afghan security forces.

In a statement, the interior ministry strongly condemned the suicide attack and confirmed the casualties, adding that a child was among those killed.

No group has so far claimed responsibility for the bombing but Taliban insurgents have stepped up suicide attacks on government targets following an Afghan army offensive which began in southern Helmand province more than two months ago.

This is the second suicide bombing in the Afghan capital in less than a week and highlights the fragile security situation as the country prepares for the start of the traditional spring-summer fighting season.

Hosting Ghani at the White House for their first presidential head-to-head last week, Obama agreed to keep the current level of 9,800 U.S. troops in Afghanistan until the end of 2015.

Last November, prominent female Afghan MP Shukria Barakzai survived a suicide attack on her convoy near the parliament in Kabul but three civilians were killed and nearly two dozen others were left wounded.

Since coming to power in September after protracted power-sharing negotiations, Ghani has sought to establish a peace process with the Taliban to end their 13-year insurgency.

Supportive signals from Pakistan, which has long held significant influence over the Taliban, have boosted hopes for possible dialogue.

The Taliban have always denied talks with the government.

They maintain they will not negotiate while foreign troops remain on Afghan soil.