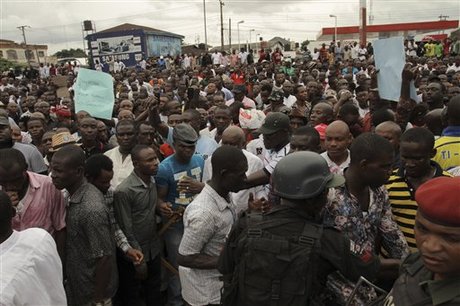 Nigerians on Monday awaited the first results of a closely fought general election, with protests over the conduct of the vote and a warning of manipulation of the count heightening fears of poll-related violence.

The presidential election pitting President Goodluck Jonathan against former military ruler Muhammadu Buhari is the closest in Nigeria's history, and first with a credible opposition challenge.

But Nigeria's Transition Monitoring Group, which had observers across the country, said: "These issues did not systematically disadvantage any candidate or party."

All eyes now are on the results, collation of which began at about 1300 GMT. Violence has often flared in previous Nigerian votes after the winner is announced.

And as tension mounted, U.S. Secretary of State John Kerry and his British counterpart Philip Hammond warned of any rigging of the count. "So far, we have seen no evidence of systemic manipulation of the process," they said in a joint statement from the sidelines of the Iran nuclear talks in Lausanne, Switzerland.

"But there are disturbing indications that the collation process -- where the votes are finally counted -- may be subject to deliberate political interference," they added.

Kayode Idowu, spokesman for the Independent National Electoral Commission (INEC) told AFP that there was "no basis" for the claim.

"There is no interference at all... We have no evidence of political interference," he said.

Kaduna state, one of the area's worst-affected by violence four years ago when some 1,000 people were killed in post-election clashes, was said to be calm but there were mixed sentiments in the largest city in the north, Kano.

"Election violence doesn't pay anybody. I think Nigerians have learnt from the fallout of 2011 and they are ready to be peaceful and... and behave responsibly," said civil servant Salawu Abubakar.

But Suleyman Maaji, who also works for the government, added: "A lot of people decided to stay behind closed doors because they don't know, they are afraid. They don't know what might happen."

Some 2,000 women protesting against the conduct of the elections were teargassed as they tried to converge on the local electoral commission offices in the southern oil city of Port Harcourt.

Jonathan's People's Democratic Party (PDP) has been in power since Nigeria returned to civilian rule in 1999 but is being pushed to the wire by Buhari, from the All Progressives Congress (APC).

The prospect of a democratic transfer of power -- plus economic woes caused by the slump in global oil prices, concerns about corruption and fears about insecurity -- energized the vote.

The winning presidential candidate needs not just the most votes but at least 25 percent support in two-thirds of Nigeria's 36 states and the Federal Capital Territory of Abuja to avoid a run-off.

Among those whose card did not work was the president himself.

But election chief Attahiru Jega said his commission was confident its objective of holding a "free, fair, credible and peaceful" election was "on course".

"We appeal to all Nigerians to remain peaceful as they await the return of these results," he told a news conference on Sunday.

Jega maintained only 0.25 percent of the 150,000 card readers used nationwide experienced problems but there were other issues, including the late or non-arrival of officials and materials.

Some 348 polling stations had to open again on Sunday to complete the vote, for which 68.8 million people are registered out of Nigeria's population of 173 million.

The PDP and the APC on Sunday traded allegations of rigging and other irregularities, which raises the possibility of a legal challenge to the results.

Thousands of APC supporters flooded the streets of the Rivers state capital Port Harcourt on Sunday, alleging irregularities by the PDP, calling for the election to be reheld.

APC women's leader Victoria Nyeche said on Monday after police used teargas: "What happened today was unprecedented... All we want is a fresh election because what happened on Saturday was a fraud."

Political parties have been urged to take any disputes to court rather than the streets.

Boko Haram has dominated the campaign, with military operations against the Islamist militants forcing a six-week delay to the scheduled February 14 election.

A spokesman for the Bauchi state governor said a round-the-clock curfew had been imposed on three areas because of the fighting.

The militants were believed to have come through the town of Alkaleri, 60 kilometers away, where there was a dawn raid on Saturday.

A series of suspected attacks on polling stations in neighboring Gombe state on Saturday killed at least seven.