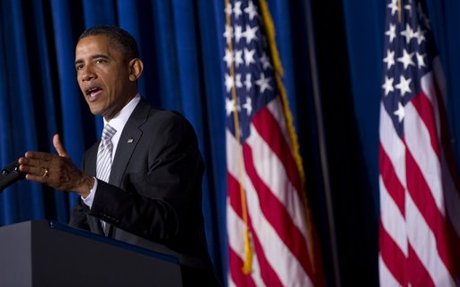 The U.S. Congress has approved long-stalled free trade agreements with Colombia, Panama and South Korea that President Barack Obama trumpeted as engines of growth and job-creation.

The accords will "significantly boost exports that bear the proud label 'Made in America,' support tens of thousands of good-paying American jobs and protect labor rights, the environment and intellectual property," Obama cheered after the pacts were approved on Wednesday.

The three deals sailed through by wide margins despite stiff opposition from labor unions historically allied with Democrats and from lawmakers fearful the pacts could finish off their home states' wounded manufacturing sectors.

The Republican-led House also approved a Senate-passed measure aimed at helping U.S. workers displaced by overseas competition, which the White House and its Democratic allies had made a precondition for advancing the trade deals.

Obama had made passing the accords -- negotiated and signed some five years ago under his predecessor, George W. Bush -- a core part of his strategy to battle 9.1 percent unemployment ahead of November 2012 elections.

Secretary of State Hillary Clinton also hailed the agreements' passage, describing South Korea, Colombia and Panama as "three important partners in strategically vital regions," and adding that with the approval of the pacts, the United States had "delivered for our friends and allies."

The Obama administration said the deals will boost U.S. exports by $13 billion and benefit U.S. agriculture and manufacturing, as well as bolster diplomatic ties to all three countries.

It has also warned that the United States stands to lose ever more market share to global competitors like the European Union or China as those economies have secured new trade deals.

The pacts' Republican and Democratic backers had been keen to pass them on the eve of visiting South Korean President Lee Myung-Bak's speech to a joint session of the U.S. Congress, a rare diplomatic prize.

Lee and Obama were to travel to Michigan on Friday to tour a General Motors plant that Washington hopes will benefit from the agreement with South Korea.

But many Democrats, notably from the hard-hit heartland, expressed worries about possible U.S. jobs losses.

"Now is not the time to pass more wrongheaded free trade agreements," said Democratic Senator Sherrod Brown, who represents the rustbelt state of Ohio. "We must put American jobs and American workers first."

And major U.S. labor unions -- whose sweeping get-out-the-vote drives have been critical to Democratic politicians -- said the accords would only hasten the bloodletting in the country's wounded manufacturing sector.

The ads pointed to a study by the Economic Policy Institute think tank in Washington that found the South Korea deal would cost some 159,000 U.S. jobs.

They also revived concerns about violence against labor activists in Colombia, where 51 were killed last year and 22 have been slain in 2011, and charged that Panama was a haven for money laundering and tax cheats.

The White House said late Tuesday that Bogota had approved an "action plan" to improve labor rights and vowed to ensure it has been "successfully implemented" before Washington fully brings that accord into force.

But many Democrats opposed the Colombia deal.

"I lost my faith in the legislation" when efforts to include the labor rights provision in the actual agreement failed, said Democratic House Minority Leader Nancy Pelosi. "If it's not in the bill, it doesn't exist."

Panama's President Ricardo Martinelli also hailed the agreement, calling it a "tool for the economic development" of the country.

The South Korea deal awaits approval of the parliament in Seoul, where the opposition vowed Thursday to resist the agreement, saying it would worsen inequality and hurt farmers.