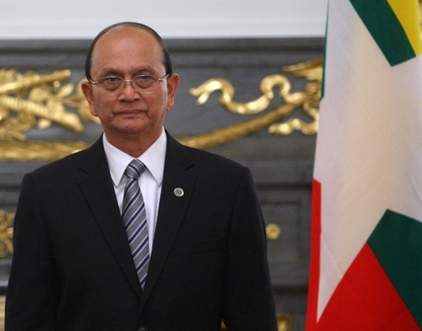 Myanmar president Thein Sein said a draft peace deal with a host of rebel groups would go down in history, in a speech Tuesday highlighting the government's eagerness to end decades of civil war.

The reformist leader, who has placed a national ceasefire agreement at the heart of the country's efforts to shake off the legacy of military rule, said an end to the fighting -- which has continued in northern border areas -- was within reach.

"The people need peace, they desire peace and they expect peace," he told representatives of 16 major ethnic minority armed groups at a meeting in Yangon on Tuesday, adding that a full agreement could be signed in months.

"After that is signed, the road is open for political dialogue. This action will ensure the peace builders a place in Myanmar's history," he said at the gathering.

His surprise appearance in Yangon came after a breakthrough in talks was announced on Monday, with representatives from the rebels, army and government agreeing a tentative deal that sets out a framework for a countrywide ceasefire.

But the draft will only be officially signed after a conference of the ethnic armed groups of which no date has so far been set.

Negotiators said some of the more contentious points had been excised from the agreement, in a move likely to have enabled the draft to be accepted.

Thein Sein's quasi-civilian government, which took power after decades of army rule in 2011, has pushed to agree a ceasefire with the country's multiple armed groups before campaigning begins for a crucial general election expected in November.

But heavy fighting has continued in Myanmar's northern Kachin and Shan states, overshadowing the peace efforts.

Myanmar has been racked by unrest since independence from Britain in 1948 as insurgencies flared among minority groups demanding greater autonomy. Conflicts were fuelled in part by tussles over the country's rich resources.

Lengthy negotiations have stumbled on a range of thorny issues, including the concept of a federal military.

Renewed unrest in the Kokang region of Shan state erupted in February and shook relations with China as tens of thousands fled heavy fighting on the border.

Myanmar has reached individual ceasefires with 14 of the 16 major armed ethnic groups.

But deals have so far proved elusive with the Ta'ang National Liberation Army in Shan state, which is fighting alongside the Kokang rebels, as well as the Kachin Independence Army.

The Kokang rebels, who spilled back into Myanmar in February after being driven out by the army in 2009, are not directly involved in the peace talks.

But the ethnic armed group negotiators are pushing for the fighting to be part of future dialogue.