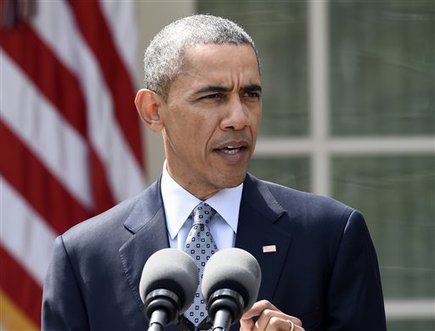 The framework nuclear deal sealed by world powers and Iran leaves major questions: Could Iran cheat? Possibly. Would the U.S or anyone else be able to respond in time? In theory, yes. Are they prepared to use military force? Questionable.

Would a final deal settle global fears about Iran's intentions? Almost surely, no.

That is, if negotiators can get to that point over the next three months.

"Many key details will need to be finalized," Obama said in his weekly radio and Internet address, adding that "nothing is agreed to until everything is agreed. And if there is backsliding, there will be no deal."

The parameters for a comprehensive accord by June 30 still include big holes for Washington and its negotiating partners.

The limits are vague on Iran's research and development of advanced technology that could be used for producing nuclear weapons. Inspectors still might not be able to enter Iranian military sites where nuclear work previously took place. The Americans and Iranians already are bickering over how fast economic sanctions on Iran would be relaxed. And Obama's assertion that the penalties could always be snapped back into force is undermined by the U.S. fact sheet describing a "dispute resolution process" enshrined in the agreement.

But the biggest issue may be one U.S. officials have emphasized above all others: the "breakout time" Iran would need to surreptitiously produce a nuclear weapon. The framework imposes a combination of restrictions that would leave Iran needing to work for at least a year to accomplish that goal, rather than the two-to-three months currently.

Obama and Secretary of State John Kerry have cited the longer breakout period as proof they've secured a "good deal" and say the one-year window is enough time for the U.S. to detect a covert Iranian push toward a bomb and to respond.

That standard would hold only for a decade, however. Over the following five years, it's unclear how far Iran's nuclear program would be kept from the bomb. And after the 15-year deal expires completely, there appear to be no constraints left to speak of — something congressional opponents and Iran's regional rivals Israel and Saudi Arabia point to as evidence of a "bad deal."

"This deal would pose a grave danger to the region and to the world and would threaten the very survival of the State of Israel," Prime Minister Benjamin Netanyahu said after an Israeli cabinet meeting Friday. "In a few years," he said, "the deal would remove the restrictions on Iran's nuclear program, enabling Iran to have a massive enrichment capacity that it could use to produce many nuclear bombs within a matter of months."

These matters and many more will now be weighed by a Congress that has watched impatiently over 18 months of negotiations. Republicans are almost universally opposed to Obama's diplomatic effort; Democrats are divided. Together they'll look at two possible pathways for congressional intervention.

The first would give lawmakers an up-or-down vote on a deal, something Obama may be amenable to despite past opposition. He stated his confidence Thursday in being able to demonstrate that an accord will advance U.S. and world security, and said his aides would engage Congress on how it can "play a constructive oversight role."

The second potential congressional action is more risky: imposing new sanctions on Iran's economy. That could end the diplomacy altogether by jeopardizing the basic formula for a final pact: removal of Western sanctions in exchange for stricter nuclear limits.

But Obama has more working in his favor now than he did last year when the negotiations twice missed deadlines. Even then, his administration managed to hold off congressional pressure.

This week's deal would compel Iran to cut in half the number of centrifuges it has spinning uranium. No bomb-making material could be fed into machines at a deeply buried underground facility that may be impervious to air attack. Advanced centrifuge models would be disconnected. A heavy water plant would not be allowed to produce weapons-grade plutonium. Inspections would increase.

And the long-term arc of Iran's nuclear activity could well argue for continued diplomacy.

The administration and other supporters of the agreement note that in the years Washington refused to talk to Tehran, demanded that Iran stop all enrichment and sought a total dismantlement of its nuclear facilities, the Iranians expanded from several dozen centrifuges to a capacity of 20,000. They established a secondary site at a fortified underground bunker. They began enriching uranium to levels just below weapons-grade.

Since November 2013, Iran is operating only 9,000 centrifuges and that number is to drop to just over 6,000. The Iranians aren't producing any higher-enriched uranium anymore and are to ship out or neutralize most of their stockpiles. The threat of a plutonium bomb seems settled at least for now.

The Iranians say they don't seek nuclear arms, with their program focused only on energy, medical and research objectives. Iran will "remain loyal and stand by promises," President Hassan Rouhani said Friday.

Obama and his top advisers don't believe the Iranians on that front. But they say the agreement makes Iran's claims at least verifiable and does far more than sanctions or military action to ensure Iran doesn't assemble an atomic arsenal.

"To be clear, there is no aspect of this agreement that is based on promises or trust," Kerry said in an opinion piece in the Boston Globe Friday. "Every element is subject to proof."

Mr President
You were belittled, ignored and insulted by a Zionist PM in several occasions. Despite supporting the Jewish entity in Palestine and giving it more aid than any previous US president, he did not show any sign of gratitude. Instead, this ingrate thug took you for granted and used you as a door mat for boosting his election campaign. Surprisingly, your response was ridiculously irrelevant. You murmured conciliatory notes of praise for the Jewish state and reiterated your inveterate commitment to the security of Israel. Your abject failure to restore the respect of your country after it was severely dented by that Zionist thug is indeed a reprehensible dereliction of your duty. Mr President it might not be too late for you to demonstrate courage and assert your authority as the world first leader.