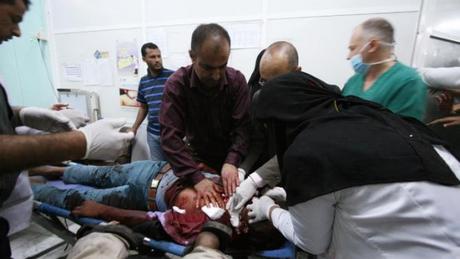 Relief workers have warned of a dire situation in the impoverished Arabian Peninsula state, where a Saudi-led coalition is waging an air war on the Iran-backed Huthi Shiite rebels.

The bloodiest fighting occurred between rebels and loyalists of President Abedrabbo Mansour Hadi in the main southern city of Aden, officials said.

More than a third of those slain in the past 24 hours -- 53 -- were killed as rebels tried to seize a port in the city, which sits on an extinct volcano jutting out into the sea.

At least 19 Huthis and 15 pro-Hadi militiamen were killed overnight in the town of Daleh, north of Aden, officials said, and seven other people died in the southern province of Abyan.

Pro-Hadi fighters have laid siege in Abyan to the base of a renegade army brigade loyal to ex-president Ali Abdullah Saleh, who is accused of backing the Huthis.

Ten rebels were killed in coalition air strikes that hit al-Anad airbase near Abyan and a military camp in Lahj, while many more died in Shabwa province.

Hadi, considered by the U.N. to be Yemen's legitimate leader, took refuge in Aden in February after the Huthis, who hail from the mountainous north, seized power in Sanaa.

Hadi fled to Saudi Arabia last month as rebels advanced on his southern stronghold, prompting the military campaign by the Saudi-led coalition, now in its 12th day.

The fighting has drawn in an array of armed groups including the Huthis, pro-Hadi militia, army units loyal to Saleh, southern separatists, Sunni tribes and al-Qaida militants.

The Red Cross has appealed for an immediate truce to facilitate aid deliveries and has called for all land, air and sea routes to be immediately opened to allow the delivery of 48 tonnes of medical supplies the organization has ready to treat up to 3,000 wounded.

The situation is particularly dire in Aden, where some neighborhoods have had no electricity or water in days.

The Red Cross has been trying to fly emergency supplies into Sanaa but the plane is still stuck on the tarmac.

"We have a cargo plane with medical supplies which is ready to go," said Sitara Jabeen, a spokeswoman for the International Committee of the Red Cross.

"We have the permission for this plane but we have logistical problems for the landing. There are less and less planes landing in Yemen. We are trying to solve the logistic problems," she told AFP.

The Red Cross is also trying to deploy a team of surgeons to Aden, but says it is still awaiting authorizations from all sides in the fighting.

But the spokesman of the Saudi-led coalition, General Ahmed Assiri, said the Red Cross had evacuated 11 staff members from Sanaa airport.

It was unclear if they were to be redeployed elsewhere in Yemen or replaced.

Russia has urged the U.N. Security Council to push for a humanitarian pause in the strikes waged by Saudi Arabia and a coalition of five Gulf monarchies, Egypt, Jordan, Morocco and Sudan.

On Monday an Indian vessel evacuated 450 people from the western Hodeida port, while 100 others boarded a Chinese vessel to safety. France evacuated 63 foreigners from the eastern port of Balhaf.

Jordan said it had evacuated almost 300 nationals since the conflict began and an AFP photographer said three Indian aircraft and one Russian plane landed Monday in Sanaa to evacuate their citizens.

Pakistan said it had been asked by Saudi Arabia to contribute aircraft, ships and ground troops to Operation Decisive Storm.

Despite close ties with Riyadh, Pakistan has so far held back from joining the offensive, saying it does not want to get involved in any conflict that would inflame sectarian tensions.

Shiite Iran has strongly criticized the intervention in Yemen and has rejected accusations of arming the Huthis.

Its foreign minister, Mohammad Javad Zarif, is due to visit Islamabad on Wednesday to discuss the situation.

In Riyadh, the Saudi cabinet reiterated the Sunni monarchy "is not seeking war" and that the offensive was to "rescue a neighboring country... and its legitimate authority."

All the Iranian huthis want is dialogue:)

The Houthis arrested most of their political opponents already. They have no one left to dialogue with except themselves.

who do you want to dialogue with? the saudi representative is hiding in saudi (reminds me of someone else) and saudis dont want to talk they just want to bomb people.
houthis will take the only road left open by saudis: war. just don't come crying when they go all the way.

do you know why the_roar and I disappear at the same time?

the ansarullah are men of god and they have nuclear weapons

Yes, let's call them 'rebels', yes. What are they rebelling about?
call them merceniries or terrorists.

As a Shia Huthi follower of Khomeini I will forgive & pray for those who insult my Lords, Sayyid Hassan Nassrallah and Sheikh Sayyid Abdul-Malik al-Houthi.

FT = the most informative poster this site has ever seen by a country mile
No wonder his posts are removed within minutes of them being posted.

flamethrower...is one man army...in this site so many person against him and he never backdown he tweet them back...I salute his spirit..

Could all Ebola go there to help...and stay there?

This war has really silenced all the Syrian rebel cheerleaders. What hypocrites.

excellent point you have right there @megahabib

you can tell the nurse helping the wounded is probably a "hadi loyalist" as she doesn't show her face (wearing the niqab) like many pro ISIS women do.

But hold on if the Hooters are winning this war why are they complaining about getting bombed out of their caves? or maybe its effecting the cannabis and other peaceful businesses that they always profess at? Hot diggity darn they just hit another Milk factory....