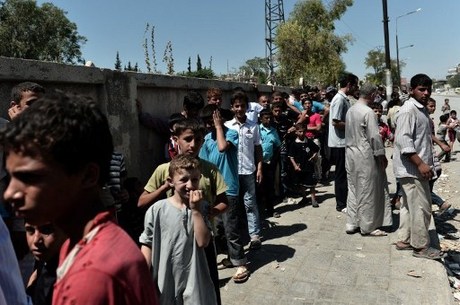 The Syrian Observatory for Human Rights said the 10 children and 15 women from Shiite towns in Aleppo province had been held by Islamist faction Jaish al-Mujahideen.

In a deal mediated by the Kurdish People's Protection Units (YPG), the women and children were released in exchange for Yousef Zawaa, a Jaish al-Mujahideen commander who was held by armed groups loyal to Syria's embattled regime.

The Britain-based Observatory said the women and children were from Zahraa and Nubol, two Shiite towns that have been under rebel siege for more than 18 months.

"They were kidnapped more than a year when crossing checkpoints on their way from Nubol and Zahraa towards Damascus and Aleppo," said Observatory head Rami Abdel Rahman.

Zawaa was captured when he strayed into the pro-government enclave by mistake, Abdel Rahman told Agene France Presse.

Elsewhere in the country, the Observatory said government air strikes had killed at least 17 people, including five children, in Idlib province in the northwest.

Five of the deaths were in Idlib city, which was captured from government forces on March 28 by a coalition of Islamist groups, including al-Qaida affiliate Al-Nusra Front.

Further proof that the syrian regime is willing to exchange with the opposition, it did it to help free the a3zaz pilgrims, the nuns of m3loula, the iranian revolutionary guards and here, but refuses to do it in the case of our captive soldiers. M8 propagandists need to keep this wound open, and the Syrian regime is happy to oblige.

Indeed, they do not know anything about honor or pride. All they can do is coward acts.

Bashar released thousands of women and children in exchange for the a3zaz 'pilgrims'.. the 48 Iranian revolutionary guards.. the nuns of ma3loula.. how did these women and children end up in Bashar's hands in the first place, humm? Honor or pride you say? You wouldn't know what those are if they hit you on the head with them like on mu7arram.