One Protester Killed in Clashes at U.N. Base in C. Africa 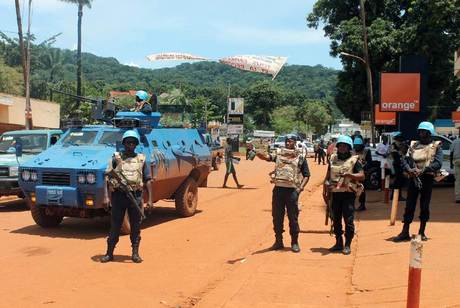 A protester was killed and several others injured on Friday when a demonstration turned violent outside a U.N. base in the Central African Republic, a U.N. spokesman said.

Peacekeepers fired warning shots to push back some 400 protesters, some of whom were armed with knives and who tried to set fire to the base in Kaga-Bandoro, north of Bangui, said spokesman Stephane Dujarric.

The U.N. MINUSCA mission "deeply regrets these incidents" and has opened an investigation following the death of the protester in the town, some 350 kilometers (215 miles) north of the capital, he added.

It was the second attack against the U.N. camp in Kaga-Bandoro in a week, the spokesman added. He could not provide details on the reasons for the protest.

The Security Council is due to take stock of the peace mission in Central African Republic at a meeting on Tuesday, a few weeks after it voted to boost the U.N. force by 1,050 peacekeepers.

The 9,000-strong MINUSCA force was deployed in September, taking over from an African Union-led mission that was sent to help stem a wave of bloody sectarian violence unleashed following a March 2013 coup.

While some stability has returned to Bangui, attacks continue in the provinces even as the country hopes to organize elections later this year.

The violence has displaced more than 873,000 people over the past two years, with half of those living as refugees in Cameroon, Chad, the Democratic Republic of Congo and Republic of Congo, according to the UNHCR.