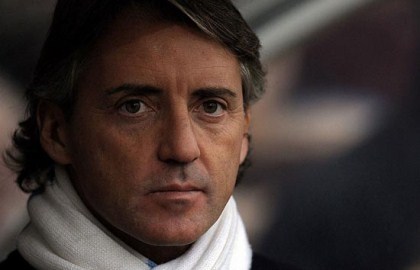 Manchester City manager Roberto Mancini said he didn't know whether Carlos Tevez would play for the club again Friday after the Argentinian striker returned to training this week.

A Manchester City official warned journalists not to ask questions about Tevez at Mancini's weekly press conference, as the club mulls action against the player over his refusal to appear as a substitute against Bayern Munich.

Tevez was forced to train alone on Thursday after returning to the club, fuelling speculation the former club captain may be frozen out before being sold in the January transfer window.

Asked if Tevez had a future at the club, Mancini responded: "I don't know."

Earlier, a City spokesman warned the press conference would be terminated if questions about Tevez were asked, prompting booing from journalists.

"We have been unable to allow questions about Carlos Tevez today, either to Carlos in general, his alleged conduct on the night in question, or the ramifications of that conduct," said the official.

"Questions also in relation to his future at the club are strictly off limits today and won't be answered. Breaches of this will result in the press conference being cancelled."

A relaxed Mancini meanwhile assured City supporters he was not feeling the strain of recent weeks, saying his experience in charge of Inter Milan had prepared him well for life at the club.

"If you speak with Rafael Benitez, with Marcello Lippi, with Leonardo, Inter Milan is a strong team for any manager," he said.

"If you stay there for four years, you are strong enough to be at every club.

"I don't have any problems. I have had experiences in my life. Why should I have any pressure?"