Change and Reform: We'll 'Raise Fists' in Face of Those Isolating Us in Military Appointments 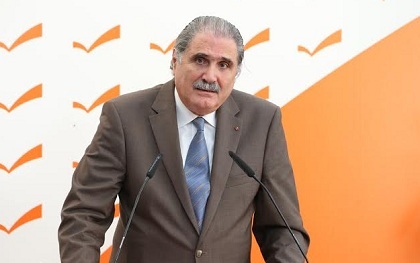 The Change and Reform parliamentary bloc on Tuesday called for an immediate halt to “unlawful” military appointments, condemning what it described as attempts to “isolate” the bloc in these designations.

“Their extensions are selective, dangerous and in violation of the defense law and the law regulating the Internal Security Forces,” said the bloc in a statement recited by ex-minister Salim Jreissati after its weekly meeting in Rabieh.

The bloc has concerns that the mandate of Army Commander General Jean Qahwaji might also be extended, a move it categorically rejects, especially amid the protracted failure to elect a new president for the country.

This inclination “fully isolates us as it caters to the interests of the other parties and we will not tolerate it,” Change and Reform added.

“This issue is existential for us, whether others like it or not,” the bloc said, noting that the matter has to do with the entire country, “especially amid these tragic circumstances in the region.”

“The luxury of eliminating us has ended,” it stressed.

“Today we're raising our voices, ahead of raising our fists in the face of those who might contemplate for a single moment to isolate us from our presidency, army, administration, development and real partnership in the national decision,” the bloc warned.

It called on the cabinet, accordingly, to “put an immediate end to this type of dangerous violations” and to “immediately appoint our military and security chiefs.”

“Elimination, under any excuse or alibi, is not anymore on the agenda of our past, present or future,” Change and Reform underlined.

Turning to the Special Tribunal for Lebanon's contempt trials against al-Jadeed TV and al-Akhbar newspaper, which will kick off soon, the bloc emphasized that “the freedom of the press is protected by the Constitution and the international charters.”

It noted that contempt lawsuits can only be filed over incidents that happen during trials or that might jeopardize justice or a court's ruling, describing the STL's decision to put legal persons on trial – al-Jadeed and al-Akhbar – as a legal heresy.

“We accepted to give up our judicial sovereignty to serve what they called 'the truth' during the circumstances that you all know, but we won't accept to give up our public and personal freedoms,” Change and Reform added.

Jreissati: Their extensions are selective, dangerous and in violation of the defense law.

The extension of the terms inside the FPM leadership for the 5th time in a row seems an acceptable violation of the FPM internal charter ya hypocrite ! Practice what you Preach....

Jreissati on STL's contempt cases against al-Jadeed and al-Akhbar: The freedom of the press is enshrined in the laws.

yes enshrined of course and that is why we saw you and your boss throw a fit when Future TV was burned to the ground by your ally the party of terror, or when Al Jadded TV was attacked and burned as well or when Nadim Qteish is being threatened with his life by your Syrian allies.
Shameless mercenaries the whole lot of you.

please shut up traitors. whoever supports the iranian extremist terrorist militia are traitors.

May you go to hell corrupt man, agent and traitor. Take with you your master and all those attempting at the destruction of the Christians.

AOUN told him to come here and talk?

I though he was in comma? Since few years ago, conscience wise?

More Leponex, Zoloft and Xanax to the mareedman. He had a neurasthenic crisis and lost control of his impulse. May be he starts realizing that he will never be president.

You gave the job of Security General to a moslem Shi3a for free. YOU Aouni bla blaber ... most important job in the lebanese state.

Not taking from Gen Ibrahim he is still a fair man and considered a good professional Officer. JUST THE post was taken so easily.

France dont have embassador in Vatican !! the Vatican dont trust in France, and have good reasons...in Lebanon, France are boycooting the actions of the Holly See in all Levant region!! France with "help"the takfirs of Saudis-Qatar-Israel-turks, are promoting and supporting the destrution of the "Dogma of Cristhianity" in Levant and in all Ortodox-Católic Mediterranic Cristhianity...