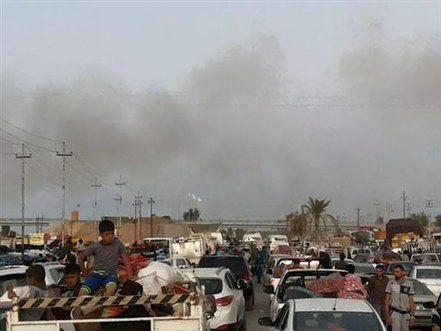 Thousands of civilians have fled escalating fighting between pro-government forces and jihadists in the Iraqi city of Ramadi over the past week, the United Nations said on Friday.

The U.N. office for the coordination of humanitarian affairs (OCHA) said 4,250 families had fled their homes in the Ramadi area since April 8.

That day, Prime Minister Haider al-Abadi announced that the security forces, fresh from a victory in the city of Tikrit, would next seek to retake Anbar province from jihadists.

The fighting so far has centered around the provincial capital Ramadi, 100 kilometers (60 miles) west of Baghdad, and the Garma area farther east.

Government forces, which controlled only small pockets of the center of Ramadi and some neighboring areas, attacked but lost more ground in a fierce IS counteroffensive.

OCHA said 9,000 people were forced to leave the northern Albu Faraj area for the center of Ramadi, "where they have taken up refuge in schools and mosques, or have moved on to Baghdad."

The interior ministry said that 1,800 families newly displaced from Anbar had traveled to the capital.

According to the International Organization for Migration, the total number of people displaced in Iraq is close to 2.7 million.

Many of those are from Anbar, where fighting between government forces and militants had displaced hundreds of thousands even before IS overran most of the province in June last year.

More were forced from their homes in successive waves of violence in Ramadi, Hit and Al-Baghdadi, among other towns in the province.

Analysts have warned that retaking the vast province is an unrealistic target for Iraq's restructuring security services and that even more limited goals in Anbar would pose serious challenges.