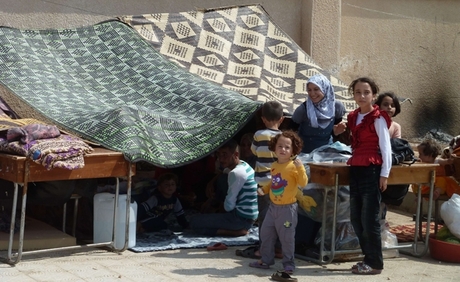 Foreign Minister Jebran Bassil remarked on Wednesday that the case of Syrian refugees is the greatest crisis modern Lebanon is facing.

He said during a conference on education held at Phoenicia Hotel: “There is a real plan to keep displaced Syrians in Lebanon, which we should confront, as they should not be turned into permanent refugees.”

“The international community is responsible for the suffering of the Syrian children because it failed to resolve their country's crisis,” he noted.

“The Lebanese state is also responsible because it has not differentiated between the real war refugee and an economic refugee,” added the minister.

“Why doesn't the international community eliminate Lebanon's foreign debt if it wants to help the refugees in the country?” he wondered.

There are more than 1.5 million Syrian refugees in Lebanon. Well over half of them are living in insecure dwellings – up from a third last year. The country has struggled to cope with their burden since the eruption of the Syrian conflict in March 2011.

of course, Geagea and Hariri started the war in Syria and displaced the Syrians because they have a plan to keep the refugees in Lebanon and change the demographics;) Keep playing on the Christian insecurities bravo!

flashback into the archives:

"" ...flamethrower--
remember, the one who keeps saying 'sectarian' (because it cannot win any argument otherwise) is in all likelyhood the hypocrite sectarian itself."

Fart on the Blat, your response review: Not worth Reading.

He said during a conference on education held at Phoenicia Hotel: “There is a real plan to keep displaced Syrians in Lebanon, which we should confront, as they should not be turned into permanent refugees.”

where is the plan and who has it? How did he become aware of the "imagined" plan? Does he have a copy of the plan?
What an idiot

“The Lebanese state is also responsible because it has not differentiated between the real war refugee and an economic refugee,” added the minister.

who was in power when the refugees started coming in and was it not the FPM-HA one sided government. Blame everybody but yourself is the only game you are good at playing.

you see he is not part of the Lebanese State and never was so he cannot blame himself and his party. As to the plan, Bassil said the plan came in 21 color pages drafted in powerpoint presentation. It was given to him by Nasir Kandil as evidence in preparation for his speech today.

Which Power point version, that makes all the difference.

lol, why didn't your 11 ministers in the miqati government object to Suleiman's dictatorship and resign to show their absolute disgust at such undemocratic practices?

excellent nonsense comeback as usual with no relevance whatsoever.

Good point mouthpiece, very good point. Why doesn't your idol assad and your hizb of terror relocate them to "government" controlled areas such as Yabrud, Qusair, Damascus, etc.

It is getting official for them

your contribution is so inline with your screen name

it sure seems so! You posted 3 comments and do you think what u posted has anything related to the article? troll

Not my fault if you are removing the previous comments, including those from your own team ;)

flamethrower is asking for EVIDENCE:)))

you'd not recognize evidence if it went between your eyes and exited the back of your head with a colorful flurry of unused brains.

Wow this is another eye opener from the orange Circus. Was it not to long ago that Colonel clown mentioned to the press that the Syrian thing was under control and would not last but a week or two to conclude? Now his lackie is saying that the refugees are a problem for Lebanon? Kizballah enjoys living in squalls as its part of their persona so let them move them in the da7yi as they are so enamored with Syria after all its the least they could do for them. Specially if you recall the many thousands Shi3a who vacated Lebanon for Syria when the last time the Yids came visiting? Yes Imbecile you make a lot of sense as I am sure the circus sheep would contend. Quote the obvious and then blame others will make the issue go away and the sheep are content.

I will agree with our FM only, that if this is a threat, we must NOT sleep over it. Even though I understand that this plan could exist, I however believe that the Syrian is very different from the Palestinian in the sense that in Syria there is no occupier like the Israeli, so quite possibly after a while some may ultimately prefer to live in relative security than to continue staying in Lebanon where the Lebanese are now making it clear in no uncertain terms that the Syrians' welcome is not forever.

To our Beloved FPMers, I sincerely feel, with the bottom of my heart, and with clear indication, FPM led by Michael Aoun, hold so many sectarian with the real meaning of the wors. If FPMers denying this it is still their problem, but again this is true feeling and clear vision, many FPMers do not show, any bit of affection, compassion, human feelings toward lebanese muslim Sunni to be direct and to the point. UNLIKE, Sunnis who want to be part of Lebanese mesh, and consider All christians including FPMers are brothers,Most of Aounis have some sort of brain short cuts or mecmechanism to get Lebanese moderate Sunnis as part of their hate list. evidence of this is clear of interviews with so many FPMers showing thier deep hate even if there were no fight with moderate Sunnis.
ALSO, Syrians who lost their homes and their families mass murdered be it by Assad Regime, Da3esh or Hizbolah and all others, does show a creepy and bad judgment and will hopefully change soon.

looks like thes fpmers always want to scare the people of something :)

Why did you remove my post ? I spoke about imbassil and little gangster. Did I say anything which is not correct?
Please keep my post because this is the unfortunate reality.