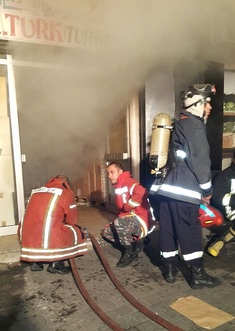 The bodies of two firefighters from Beirut's Civil Defense, who had gone missing in a fire in Beirut, were found on Tuesday.

The firefighters were dousing the blaze at a printing house and a depot that lie 200 meters underground in Beirut's Mar Elias street on Monday night when they went missing.

Civil Defense rescuers cleared the building of its residents when the blaze broke out on Monday. But two of the firefighters, who were taking part in the rescue efforts, went missing.

Their bodies were found and transported to Beirut's Makassed hospital on Tuesday.

It is tragic news. allah yer7amon.

Oh, this is tragic and very sad, may their souls rest in peace.

rest in peace..what a tragedy...but why is a printing house located in a basement of a residential building? It should not be permitted...by the way Naharnet, I doubt that the printing house and the depot lie 200 meters underground...maybe 20 if it is like 4 floors underground..anyhow, it is not important...

Our condolences go out to the families of the fallen firefighters!
Allah Yirhamon wiy sabir ahlaton.
I knew Adel as a shop owner here in my neighborhood I also met his fiancée and I knew that they were planning to get married soon.
Rest in Peace...