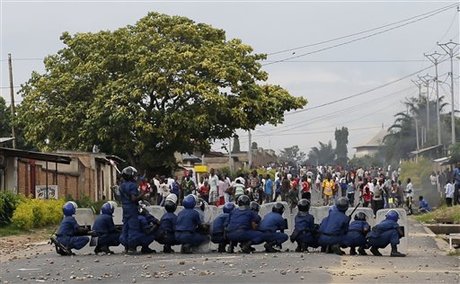 Protest-hit Burundi on Wednesday took the controversial question of President Pierre Nkurunziza's third term bid to the constitutional court but opposition supporters dismissed the move and said demonstrations would go on.

At least five people have died since unrest broke out at the weekend, when the ruling CNDD-FDD party designated Nkurunziza its candidate for the presidential election to be held in the central African nation on June 26.

Demonstrators and police faced off in the capital Bujumbura Wednesday, but the city was far quieter than in previous days, with some shops reopening and a heavy police deployment on the streets.

"All the roads are blocked by police... but the protests will not stop until he gives up the third term," said Thierry, a demonstrator.

Opposition figures and rights groups say Nkurunziza's attempt to stand for a third consecutive term goes against the constitution as well as the peace deal that ended a civil war in 2006.

The Senate has submitted a motion has to the constitutional court seeking interpretation of the issue.

But opposition leaders such as lawmaker Jean Minani were dismissive of what they said was a court loyal to the president.

"It is as if the Senate had asked Nkurunziza himself to interpret the constitution," Minani told AFP. "The opposition... will continue to say no to the third term."

But Nkurunziza has remained defiant: his communication chief has insisted it was "out of the question" that he would back down on his bid for a third term.

U.S. Assistant Secretary for Democracy and Human Rights Tom Malinowski was also due in Bujumbura.

Hundreds of thousands of people were killed in the 13-year civil war, which divided the country along ethnic lines, between the Hutu majority and Tutsi people.

The government has banned all protests and deployed large numbers of police and troops on the streets since Sunday, firing live ammunition, tear gas and water cannon.

Hundreds of stone-throwing protesters have been arrested.

Some of those killed were shot at close range, while the police said at least 37 officers have been wounded.

The main independent radio station has also been shut down, while the attorney-general has set up a special commission to identify and arrest those accused of sparking an "insurrection" through the protests.

The president, a former rebel leader and born-again Christian from the Hutu majority, has been in power for two terms since 2005.

His supporters say he is eligible to run again, as his first term in office was after he was elected by parliament -- not directly by the people as the constitution states.

The constitution says the president is elected by universal direct suffrage, "for a mandate of five years renewable one time."

The country is also holding parliamentary elections on May 26, a month ahead of the presidential vote.

Some 25,000 Burundians have fled the country in recent weeks, according to the U.N. refugee agency, which has warned the numbers could rise.

Many are fleeing threats by the pro-government militia Imbonerakure, the youth wing of the ruling party.

Rights groups allege that the militia has been armed and trained over the past year in order to help Nkurunziza remain in office.

The United Nations warned Wednesday up to 400,000 people could be affected in a worse case scenario should the upcoming elections turn violent, in an appeal to donors for extra cash to prepare.

"Tensions continue to increase and the political landscape is marred by polarization and limited political space," according to a report by the U.N. Office for the Coordination of Humanitarian Affairs (OCHA).

"These persisting challenges could potentially trigger electoral violence, with massive humanitarian impact for Burundi and the neighboring countries in the Great Lakes region."