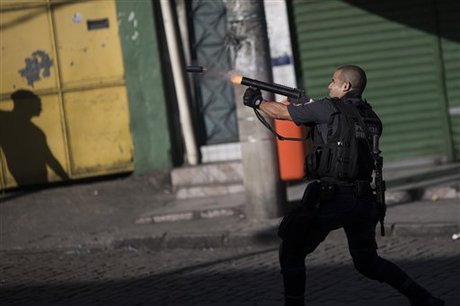 A total of 213 people were injured and 13 arrested in the violence in the city of Curitiba in southern Brazil, officials said.

Organizers say the rally outside the  legislature in Parana state brought together some 20,000 people.

The clash started when the teachers tried to break through a security perimeter established by police outside the state assembly.

Teachers covered their noses and mouths with handkerchiefs to ward off the smoke. Some hurled rocks and sticks at the police.

The riot police advanced firing rubber bullets behind the protection of an armored vehicle.

The Curitiba city hall said on Twitter that 150 people were treated for injuries. But Brazilian media quoting the local government later updated the figure to 213.

Police said 20 officers were hurt, out of a total of 60 injured.

The newspaper O Globo said a TV cameraman was attacked by a pit bull used by the police and had to undergo emergency surgery.

It said another journalist was hit in the face by a rubber bullet.