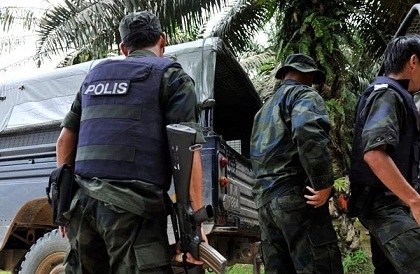 Six men, including an Indonesian suspected to be an arms expert, were charged on Thursday for allegedly conspiring to plot terror attacks in Malaysia.

The men, aged between 25 and 48, were charged with being "party to a conspiracy to promote terror in Malaysia", according to court documents obtained by AFP.

"They were handcuffed and brought to court under heavy security," lawyer Shariff Mat told AFP after the men, who include five Malaysians, appeared at a sessions court in the northern state of Kedah.

Shariff said no plea was recorded and they were expected to appear in court on May 31, with the case to be transferred to the high court.

The Indonesian, Ali Saifuddin, is alleged to be an arms expert formerly with the Southeast Asian militant group Jemaah Islamiyah (JI).

They were among a group of 17 detained in early April for a suspected plot to kidnap high-profile figures and launch terrorist attacks.

National police chief Khalid Abu Bakar had previously said the plotters were believed to have been inspired by the extremist Islamic State (IS) group and its bloody jihad in Syria and Iraq.

The group was said to have been planning attacks in the capital Kuala Lumpur and in nearby Putrajaya, which houses Malaysia's federal government apparatus.

They had also been planning to rob banks to raise funds, and raid armed forces installations and police stations to obtain weapons, according to Khalid.

In February, Home Minister Zahid Hamidi warned that IS members in Malaysia had planned to kidnap tycoons and rob banks to finance terrorist activities.

Just last weekend, officials arrested 12 suspected Islamic militants who were plotting attacks in the country just as it was preparing to host a prominent Southeast Asian summit with regional leaders and ministers.

According to officials, so far about a hundred people have been arrested for suspected involvement in the IS jihad in Syria.