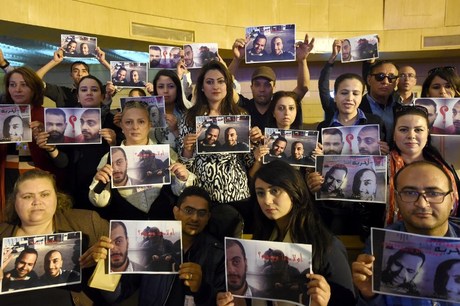 Protesters took to the streets of Tunis Friday demanding to know the truth about the fate of two journalists whose execution-style killing in Libya was claimed by the Islamic State group.

"Give us back Sofiene; give us back Nadhir," the crowd of almost 200 demonstrators chanted as they brandished pictures of Sofiene Chourabi and Nadhir Ktari.

Journalist Chourabi and photographer Ktari went missing in eastern Libya last September, after being seized by an armed group.

An IS affiliate in Libya claimed in January that it had killed the two men.

But on Wednesday the Libyan government said that five detainees had admitted to killing five reporters from a local television station as well as Chourabi and Ktari.

Relatives of Chourabi and Ktari accuse Tunisian authorities of failing to obtain the release of the journalists when they were seized, and of inaction after their murder.

"We want the truth. We are fed up with rumors," Chourabi's mother told reporters at Friday's demonstrations.

A cousin of Ktari added: "We need something tangible. You (the authorities) have lied to us for too long."

Around them protesters chanted: "Down with any president, as long as Tunisian blood means nothing."

Libya's descent into chaos since the 2011 uprising has seen the formation of rival parliaments and governments and the emergence of rival armed groups, including IS which gained a foothold in the oil-rich North African state.