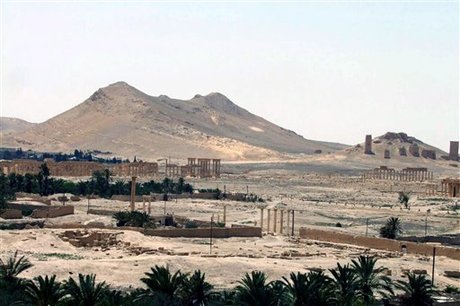 The Al-Hail and Arak gas fields, 40 and 25 kilometers (25 and 15 miles) respectively from Palmyra, were vital for the regime's generation of electricity for areas under its control, the Syrian Observatory for Human Rights said.

Fierce clashes have rocked Palmyra's outskirts since IS launched an offensive on May 13 to capture the 2,000-year-old world heritage site nicknamed "the pearl of the desert".

Since then, at least 364 people, including combatants from both sides and 62 civilians, have been killed in the battle for the ancient city.

On Saturday, the jihadists seized most of the city's north, but were pushed out by government troops less than 24 hours later.

"The military situation is under control in the city, but the clashes are ongoing north and northwest of it," said Talal Barazi, the governor of Homs province where Palmyra is located.

"At least five civilians, including two children, were killed Sunday night when IS fired rockets on numerous neighborhoods in Tadmur," the Observatory said, using the Arabic name for the city.

"Everyone is holed up at home," Khalil al-Hariri, head of the local museum, told AFP by phone from Palmyra.

"People are afraid of going out."

According to Syrian antiquities director Mamoun Abdulkarim, two rockets on Sunday hit the garden of Palmyra's museum which housed statues, sarcophagi and other well-preserved artifacts, without causing any damage.

"The museum was emptied a few weeks ago, and the main objects were transferred to secret safe spaces," he told AFP.

Nevertheless, "there are still pieces that we could not transport because they are fixed on the wall", Abdulkarim added.

The antiquities director, who had called on the international community to prevent a "catastrophe" at Palmyra, said he remained worried about the "ancient city, especially its sculpted sarcophagi".

Since Saturday, the jihadists have been firmly entrenched one kilometer (less than a mile) from Palmyra's archaeological treasures, including colonnaded alleys and elaborate tombs southwest of the city.

Fears that IS would destroy the beautiful artifacts spurred urgent calls from UNESCO for international action.

Northeast of the city, IS seized the Al-Hail and Arak gas fields after attacking the facilities on Sunday. The jihadists consolidated their control by Monday, with at least 56 regime forces killed in the two-day assault.

Al-Hail is the largest gas field in Homs province after the massive Shaer field, which remains under regime control but has been attacked by IS before.

The Homs governor confirmed IS had attacked the fields, but denied reports they had fallen.

"We cannot say they are in control of these fields, as IS is incapable of holding one position for a long time," Barazi said.

In the northwest, rebels and Al-Qaida's Syria affiliate Al-Nusra Front also edged closer to the Al-Mastumah military compound, one of the regime's last military bases in Idlib province.

Seems like the whole concept of "relevance" is still eluding you the_1_anonyme... but keep trying.

Now you ask for the Infidels help? where is Israel to help Kizb defeat them in Syrianam one could ask? but off course you do not have an answer and will resort to its not our fault but someone elses... the good news is that you continue to support Israel like a good kizb follower should after all without them where would you be?

Not to worry the few the brave Kizb members will go after them and liberate the area in a matter of days. In the meantime the bearded goat will rant and shake his fingers in the air and blame the LAF or KSA for Syrianam. And Israel takes another day off thanks to Kizb. Liberating Israel one jihad at a time...loooool

you're simply irrelevant anonyme, it's a fact and I can't pretend otherwise. reading your lunatic rants and endless attempts to justify them is the biggest waste of time ever.