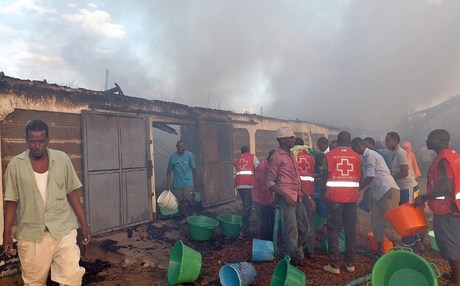 The aid agency Doctors Without Borders (MSF) said Thursday it had evacuated 42 of its staff from the Dadaab refugee camp for Somalis in northeastern Kenya, citing "deteriorating security conditions."

"The current security situation is severely limiting the ability of our medical staff to provide humanitarian aid to people who desperately need it," said  Charles Gaudry, MSF's head of mission in Kenya.

"Refugees and medical staff are bearing the brunt of the deteriorating security conditions," he said.

Kenya's government has hosted refugees from Somalia since 1991 when civil war tore the country apart. Since then Dadaab has grown into the world's largest refugee settlement, with over 350,000 residents.

MSF said "the precautionary measure" has had direct impact the provision of  much-needed medical care to refugees, with two out of its four health posts closed.

The agency also called on "armed groups to guarantee respect for medical facilities, patients and staff."

In April Shebab militants attacked a university in the nearby town of Garissa, killing 148 people including 142 students.