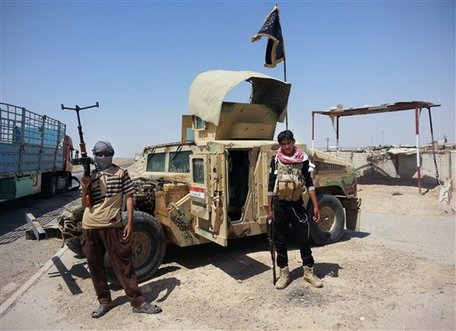 "In the collapse of Mosul, we lost a lot of weapons," Abadi said in an interview with Iraqiya state TV. "We lost 2,300 Humvees in Mosul alone."

While the exact price of the vehicles varies depending on how they are armored and equipped, it is clearly a hugely expensive loss that has boosted IS' capabilities.

Last year, the State Department approved a possible sale to Iraq of 1,000 Humvees with increased Armour, machineguns, grenade launchers, other gear and support that was estimated to cost $579 million.

Clashes began in Mosul, Iraq's second city, late on June 9, 2014, and Iraqi forces lost it the following day to IS, which spearheaded an offensive that overran much of the country's Sunni Arab heartland.

The militants gained ample arms, ammunition and other equipment when multiple Iraqi divisions fell apart in the country's north, abandoning gear and shedding uniforms in their haste to flee.

IS has used captured Humvees, which were provided to Iraq by the United States, in subsequent fighting, rigging some with explosives for suicide bombings.

Iraqi security forces backed by Shiite militias have regained significant ground from IS in Diyala and Salaheddin provinces north of Baghdad.

But that momentum was slashed in mid-May when IS overran Ramadi, the capital of Anbar province, west of Baghdad, where Iraqi forces had held out against militants for more than a year.