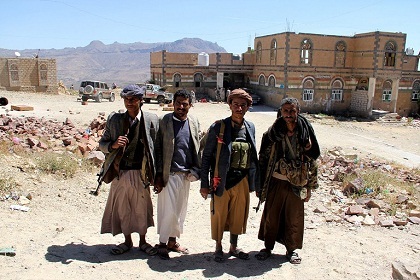 An American among several believed held by Huthis in Yemen was freed and receiving treatment Tuesday in neighboring Oman, which has been hosting talks between Washington and the Iran-backed Shiite rebels.

A diplomat in Muscat said the talks between the Americans and the Huthis were aimed at promoting a proposed peace conference in Geneva, which the United Nations has so far failed to persuade the warring parties to attend.

But the State Department said only that Anne Patterson, the top U.S. official for Near East affairs, was in Oman for discussions "about many issues".

News of the release of American journalist Casey Coombs came as Omani state media reported that a Singaporean had also arrived in the sultanate on his way home.

"I can... confirm that U.S. citizen Casey Coombs has departed Yemen and has arrived safely in Muscat," said State Department spokeswoman Marie Harf.

"He is in stable condition. The U.S. ambassador and a consular official met him at the airport upon his arrival and are providing all possible consular assistance."

Pictures released by Oman's official ONA news agency showed Coombs being stretchered into an ambulance with a brace around his head.

"We are grateful to the government of Oman and personally to Sultan Qaboos for assisting with the safe passage of a U.S. citizen to Oman," said Harf.

Coombs, who had been working as a freelance journalist in Yemen since 2012, writing for publications including Time magazine and The Intercept, had been held by the Huthis for two weeks, the Committee to Protect Journalists said.

The rebels have controlled the capital since September and have seized much of the rest of the country despite a Saudi-led bombing campaign launched in March in support of exiled President Abedrabbo Mansour Hadi.

The journalist's detention by the Huthis had been kept under wraps at the request of his family.

In an article he wrote for The Intercept last month, he said he had been trying to leave the country, but was struggling to find a safe route out amid the fighting.

The United States said at the weekend it was working to secure the release of "several U.S. citizens" held in Yemen.

Washington has provided intelligence and logistical support for the Saudi-led air campaign but has called for a political solution to the conflict which has killed at least 2,000 people since March.

Diplomatic sources in Oman told AFP on Monday that talks were taking place between a U.S. delegation and the Huthis.

"During these secret and informal talks, the Americans are seeking to bring closer positions of the Huthis on one hand, and the Saudis and President Hadi on the other, with the hope of convincing these to lower the ceiling of their demands," one diplomat told AFP.

The Geneva conference had been due to take place on May 28 but was postponed, after Hadi insisted that the rebels must first withdraw from at least part of the territory they have seized, in line with a UN Security Council resolution.

In Riyadh, U.N. envoy Ismail Ould Cheikh Ahmed arrived from weekend talks in the rebel-held capital and met with Hadi.

His exiled but internationally recognized government was aware of the talks in Oman, saying on Sunday that they had been convened at Washington's request.

They followed a visit to Muscat last week by the foreign minister of Shiite Iran, Saudi Arabia's regional rival which is accused of arming the rebels, a charge it denies.

Muscat has good ties with both Tehran and Riyadh, and has often played the role of mediator.

It is the only member of the six-nation Gulf Cooperation Council not to have joined the Saudi-led coalition.

Meanwhile, the captors of Frenchwoman Isabelle Prime, kidnapped in Yemen on February 24, posted the first video of her since her abduction, in which she appealed to the French and Yemeni presidents to take action to secure her release.