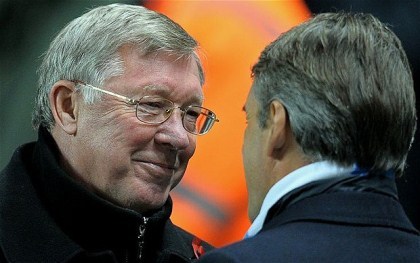 Manchester may not yet be, as a local newspaper columnist recently declared, "the football capital of the world." But for 90 minutes at Old Trafford on Sunday, it will certainly feel like it.

A global audience of several hundred million will turn their gaze to the "Theater of Dreams" as Manchester City attempt to underscore their emergence as the rising power of English football against Manchester United.

A potentially titanic showdown between the two richest clubs in English football will see City open up a five-point lead at the top of the Premier League if they score their first away victory over United since 2008.

It is the first time since 1968 that City and United have met while occupying first and second place in the table.

That statistic lends weight to the view that the power struggle between the red and blue halves of Manchester is poised to become the defining rivalry of the Premier League in the coming years, if it has not already done so.

United duly responded by clinching their record 19th league title before claiming a 3-2 victory over City in this year's Community Shield curtain-raiser.

Since then the two clubs have been neck-and-neck at the top of the Premier League, before City edged two points clear last weekend with a 4-1 win over Aston Villa while United were held 1-1 at Liverpool.

Yet if City are to extend their lead this weekend, they will have to overcome United's astounding home form, which has seen them drop just two points in their last 25 games at Old Trafford.

Ferguson's team have not lost at home since April 2010, and Portuguese winger Nani believes that gives the Red Devil an advantage on Sunday.

"City have a fantastic team at the moment with fantastic players," Nani said. "They are playing a lot of good stuff and it will be difficult to play against them. But we should not forget; we are United.

"When we play at home it is very hard to beat us. That is why we are so confident. With a record like ours, we should be confident every time we play at home. We have to believe we are going to win most of the games."

City midfielder Nigel de Jong believes his team-mates will derive confidence from the fact that they are now looking down on United from the summit of the Premier League. "Everyone believes we can go there and win," de Jong said.

"We're going there as number one and the aim is to stay number one. We feel we can do that but United will be confident as well, and they're playing at home, so it's a massive game for both of us."

Nani meanwhile rejected suggestions that Sunday's game could be a title decider, pointing to the improved form of Chelsea, who face west London neighbors Queens Park Rangers in another Premier League derby this weekend.

"City are one of the teams who have been doing fantastically well since the season started," said Nani. "But there are a lot of teams who are doing well and we need to be aware of them. Chelsea have been excellent for a start.

"It is too early to say it is just going to be about Manchester United and Manchester City for the title."

Meanwhile third-placed Chelsea will attempt to build on their recent run of form against QPR at Loftus Road. QPR boss Neil Warnock insists his side will not be over-awed by the occasion.

"People will try and write us off, but the challenge of the Premier League is to try and do well against these teams," Warnock said.

"Who's to say we can't do well against the big teams? There will be one or two shocks this season and hopefully we can provide it."