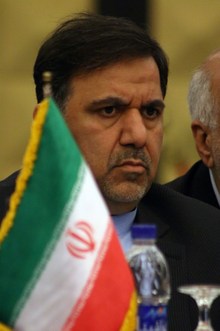 Iranian Transport Minister Abbas Akhoundi said Tuesday that Paris and Tehran have a "love/hate" relationship, as he urged France to throw its weight behind a draft deal on Iran's nuclear program.

"In a word, I would say that love and hate dominate all aspects of our relationship," Akhoundi said at a conference in Paris.

"I believe there is no consensus (in France) and that there is no French strategy with regards to Iran," he said. "Sooner or later, the nuclear conflict will be resolved and France has to decide its position now."

Iran and the P5+1 group (Britain, China, France, Russia and the United States plus Germany) have agreed the outlines of a deal on Iran's nuclear program which world powers are trying to conclude by June 30.

However, French Foreign Minister Laurent Fabius, seen as a hawk in the negotiations, has said France opposes any deal with Iran that does not allow for inspections of military sites.

The deal is aimed at preventing Iran from developing the atomic bomb in exchange for an easing of crippling economic sanctions.