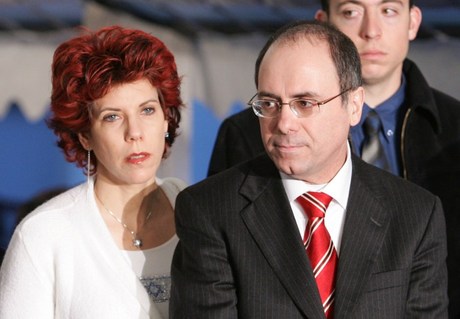 The flamboyant wife of Israeli Interior Minister Silvan Shalom published an "inappropriate joke" Sunday about U.S. President Barack Obama on her Twitter account, only to later delete it and apologize.

"Do u know what Obama Coffee is? Black and weak," Judy Shalom Nir-Mozes wrote to her 74,400 followers.

Online shock, condemnation and accusations of racism later led her to delete the incriminating tweet.

"I apologize, that was a stupid joke somebody told me," she wrote on her @JudyMozes Twitter account in English.

"President Obama I shouldnt have written the inappropriate joke I heard," she also wrote, addressing the U.S. leader directly. "I like people no matter about their race and religion."

"Sorry if I caused any offense to anyone. I hope I will stay married when my husband will land and hear what I did," she added.

Her husband, a member of Prime Minister Benjamin Netanyahu's Likud party, is also the minister charged with strategic ties with the United States.

The outspoken Nir-Mozes is a scion of the Mozes family that owns the top-selling Yediot Aharonot daily. She hosts a weekly radio program as well as participating in a number of television shows.

She publishes blunt tweets and Facebook posts about a wide range of social and political issues, including criticizing members of Israel's political left for what she perceives as their lack of patriotism.

Netanyahu is also a regular target for her criticism.

Strange world. One can no longer tell jokes. Even when depicting reality. A true leader should be able to laugh on himself.

I agree humble. I thought it was kind of funny. I am not a racist by any means...it was just a joke.

Well, there is no denying that Mr Obama is Black.

Also in her defense, racism is a normal thing in israel.