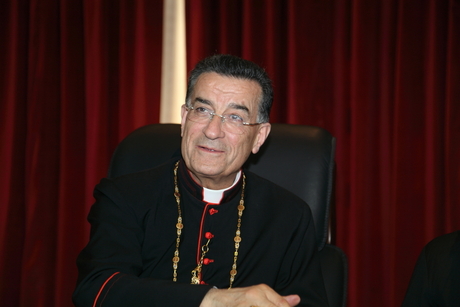 Maronite Patriarch Beshara al-Rahi urged the rival March 8 and 14 alliances on Thursday to officially announce the name of their presidential candidates and elect a new head of state.

“It is a shame that the presidential vacuum crossed the one-year mark,” al-Rahi told a delegation from the Maronite League that visited him in Bkirki.

“We did all we can to find solutions but the March 8 and 14 alliances are bickering in vain with each other,” he said.

The two coalitions should “officially announce the name of their candidates so that we know where we are heading,” said al-Rahi.

“Let them head to parliament to only elect a new president,” the patriarch told the delegation that was headed by the head of the Maronite League, Samir Abi Lamaa.

He warned that “the country is dying and the institutions are disintegrating.”

The vacuum is partly to be blamed on Christian rivals Free Patriotic Movement leader MP Michel Aoun and Lebanese Forces chief Samir Geagea, who are both presidential candidates.

The MPs of Aoun's Change and Reform bloc in addition to Hizbullah and other lawmakers from the March 8 alliance have been boycotting the polls over their call for a prior agreement on a consensual candidate.

Your Eminence, urging will take us nowhere, name a candidate and let's vote him him. Let's create mayhem over this issue, you appoint the new president, then let's see the reaction of those who don't want a new president. Sorry Y.E, but yours is one statement among too many now.

Dear Batrak
what about the man destroying the Christians?

the Batrak does not know what you are talking about.

Is it possible to imagine one Christian desiring an Islamic Republic in Lebanon???

You have the army of mediocrities followed by the multitude of fools. As the mediocrities and the fools always form the immense majority, it is impossible for them to elect an intelligent presiden

You have the army of mediocrities followed by the multitude of fools. As the mediocrities and the fools always form the immense majority, it is impossible for them to elect an intelligent president

Can't we see who is playing the games here? Isn't it obvious how manipulating Hizbolah with Aoun are over this crisis? Mainly. Hizbolah behind Aoun as long as he is not elected, they burn him and and gave him on a dirty plate that no one accept to take. These smart a..es ciuld have played the game by simply showing Aoun as a moderate and showing him temporarly distant from them (hizbolah) and Aoun can show some moderate tone ..but no Hizbollah intended to burn Aoun and Aoun with his Arrogance burns the last bridge.

thanks Geagea-Hariri-jumbalah ! thanks intelegence of the Army of Lebanon for supporting the killers of the Cristhians in Levant!!
.
https://www.youtube.com/watch?v=wDJRgDsX-50

Christians are followers of the Christ NOT the CRISTH...

you have to excuse hass1978 for his poor english language skills:)

You are making him cry now!! Happy?
Anyway. With all respect, don't divert the attention from blaming Aoun and his Clowns.

Eagle, this language business is intentional, a yellow troll must always trip on his own thread.

This country is dying because clerics are getting involved in politics