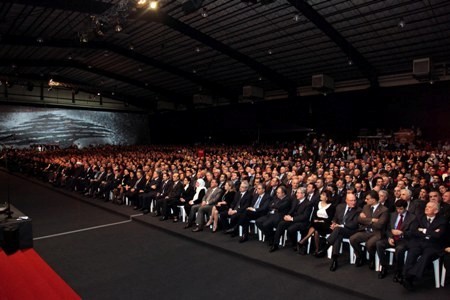 The March 14 alliance's national council is scheduled to elect its president during a meeting on Sunday, reported al-Liwaa newspaper on Saturday.

It said that former MP Samir Franjieh is the favorite in the race even though he has not formally announced his candidacy.

Other candidates include MP Marwan Hamadeh.

Al-Liwaa did not rule out “surprises” taking place in the elections, which are set to be held at BIEL in Beirut at 10:00 am on Sunday.

Three hundred independent figures of the March 14 alliance have been invited to take part in the elections.

Following the polls, work committees will be formed after the approval of an internal system for the national council.

The council will work as a separate entity within the coalition.

It will include independent figures, who would opt against allying themselves with any political party, explained al-Liwaa.

Samir Frangieh would be an excellent president for the whole Lebanon.

No no, we want a real war criminal and someone who would do "everything saudi arabia asks from him", geagea for president!

“Above all, he expressed readiness to do what the kingdom asks him to do.”

Asiri also praised Geagea for holding a news conference in which he defended statements by the Saudi Grand Mufti Sheikh Abdul Aziz bin Abdullah al-Sheikh, who said it was religiously legitimate to destroy churches in Kuwait because the Arab Peninsula should not see a “meeting of two religions.”

According to a second document released by WikiLeaks on the same matter, Prince Faisal forwarded the letter to then-Saudi King Abdullah with the recommendation of supporting Geagea financially since he pledged to “work under the kingdom’s instructions.”

as you take Wikileaks a lot to prove your points then i guess you agree with Wikileaks on hezbollah and its financing out of prostitution, drug dealings, crimes, operations in South america...how they purchase fertilizers from syria by the hezbi minister of agriculture to make bombs.... all leaked by Wikileaks... lol!

Sorry to burst your bubble but the accuracy of what's in those leaks, unlike the Snowdon ones, is questionable. They are supposed to be documents obtained by something calling itself the Yemen Cyber Army who hacked the Saudi foreign ministry emails. The accuracy of their contents are highly dubious and as with the widely reported Assad leaks of a few months ago they cannot be independently verified.

You want a real war criminal mowaten? You already have one with Nabih Berri, one is enough.

I fully agree with you Humble.

both of you read my lips its Aoun or nothing!