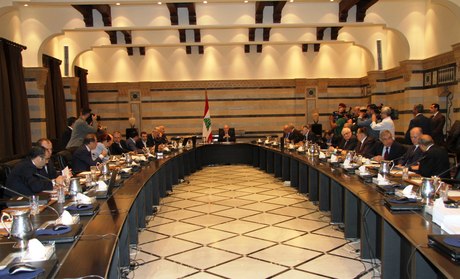 “We couldn't agree during the cabinet session today. In the absence of a president there is no clear mechanism on the authorities of each minister,” Education Minister Elias Bou Saab said following the session.

He is one of two ministers representing the Free Patriotic Movement, which had caused the three-week suspension of sessions over its demand for the article on the appointment of high-ranking security and military officials to top the cabinet agenda.

In the absence of the president, the cabinet had agreed on a decision-making mechanism by consensus among the ministers. But ministers representing different parties began to put sticks in the wheels of the government, leading it to paralysis.

Information Minister Ramzi Jreij said that during the session, several ministers expressed their viewpoints on the paralysis.

They also discussed the agenda of the cabinet and the appointments, he said, without giving further details.

He said Salam stressed that converging viewpoints should not lead to paralysis and asked the cabinet to approve the agriculture minister's proposal on the export of agricultural products.

“The ministers approved the allocation of 21 million dollars for that purpose,” said Jreij.

But according to reports, an angry Salam adjourned the session after a dispute erupted among several ministers on the article proposed by Agriculture Minister Akram Shehayyeb.

Shehayyeb told reporters that the objection of the ministers of FPM, Hizbullah and Arthur Nazarian from the Tashnag Party was not on the export of the products but on the discussion of the article itself.

The FPM and their allies are pushing for the discussion of the appointments of the top security and military officials despite the objection of other cabinet ministers.

Reports also said that a decree on an extraordinary parliamentary session did not receive the support of the cabinet's simple majority.

Speaker Nabih Berri said Wednesday that after the opening of the session, he would call parliament to meet to act on several draft-laws.

“I am adamant on holding legislative sessions because the situation in the country is no longer bearable,” he said.

i enjoy reading your comments
always a pleasure