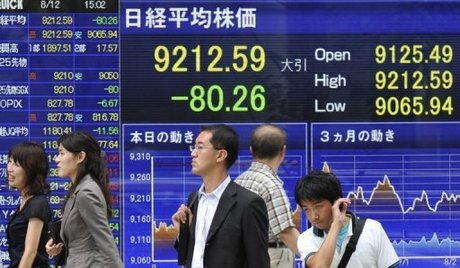 Asian shares surged on Monday after weekend meetings of European leaders resulted in "good progress" on tackling a regional debt crisis that has threatened to plunge the world economy into recession.

The Eurozone wants to beef up its 440-billion-euro ($610 billion) rescue fund, the European Financial Stability Facility, to convince markets it has the means to protect highly indebted nations such as Italy and Greece.

However, they announced few concrete details from the weekend meetings, vowing to reveal all at a second summit on Wednesday.

Investors were also keeping an eye on the yen, which reached a record post-war high of 75.78 against the dollar on Friday, before the greenback regained some ground to 76.18 yen in afternoon trade Monday.

The surge prompted Japan's finance minister to call for "decisive steps" to tame the currency's rapid rise amid worries that a strong yen will hammer Japanese exports.

Eurozone talks have been mired in debate over how to increase the rescue fund's firepower without increasing the guarantees each state puts into the fund -- a sensitive issue for richer nations such as Germany, which are tired of bailing out the eurozone's weaker members.

French President Nicolas Sarkozy said a "quite broad agreement is taking shape on the reinforcement of the EFSF", but cautioned that long hours of negotiations remained ahead in the EU summit set for Wednesday.

German Chancellor Angela Merkel said "two models" were on the table while EU president Herman Van Rompuy said the two could be combined to provide a "cumulative effect".

One option, according to EU sources, would see the EFSF act as an insurer on part of the debt issued by countries deemed at risk in order to keep investors interested in their bonds. Germany appears to have convinced France to drop its opposition to this idea.

The second option calls for the creation of a second fund attached to the EFSF to garner contributions from nations outside the European Union. This is where Eurozone leaders disagree.

European and US stock markets jumped Friday, amid growing optimism that a plan would ultimately be forged, and end months of uncertainty.

However, some traders cast doubt on whether the talks would produce a concrete plan with investors taking a cautious short-term view of the markets.

Eurozone leaders are toying with the idea of asking China and other emerging powers to help them out of the debt crisis by taking part in the bailout fund, but some are reluctant to call in Beijing.

Investors were also given a lift by data from China showing manufacturing activity hit a five-month high in October, lifted by a pick-up in output and orders despite the global economic turmoil.

The preliminary HSBC purchasing managers' index (PMI) stood at 51.1 in October, up from 49.9 in September, the British banking giant said, lifting hopes that the world's second-largest economy can avoid a hard landing.

A reading above 50 indicates the sector is expanding, while a reading below 50 suggests a contraction.

The final reading for October is due on November 1.

New York's main contract, light sweet crude for delivery in December, rose 53 cents to $87.93 a barrel in the afternoon.

-- Wellington and Bangkok are closed for public holidays.