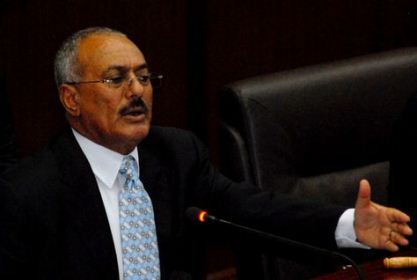 A truce between government and dissident forces collapsed as soon as it was announced, with at least 15 killed on Tuesday, as Yemeni President Ali Abdullah Saleh told the U.S. he is prepared to step down.

The State Department said Saleh told the U.S. ambassador in Sanaa that he is committed to a plan brokered by Gulf states that calls on him to quit 30 days after signing the deal in exchange for immunity from prosecution.

In Sanaa and in Yemen's second largest city Taez at least 15 people were killed, according to medical officials and tribal sources.

A seven-year-old child and a woman were among seven people killed in Taez, after what residents said was random shelling by government forces of neighborhoods. The interior ministry said four policemen also died.

In Sanaa, the truce failed to take hold. Tribal sources said at least one man was killed and nine people were wounded when shelling rocked the northern al-Hasaba neighborhood.

The government and dissident general Ali Mohsen al-Ahmar had reached a ceasefire agreement, according to an official statement.

Tribal forces in al-Hasaba led by powerful chief Sheikh Sadiq al-Ahmar, who backs the general and has thrown his support behind pro-democracy protests across Yemen, also agreed to the ceasefire, sources in his office told Agence France Presse.

"The truce was not respected for one second by the government," Sheikh Hemyar told AFP by telephone. "As I talk to you, our homes are being shelled" in al-Hasaba.

Residents of al-Hasaba confirmed that the area was being raked by gunfire and explosions.

Gunfire also rang out near Change Square, the epicenter of anti-regime protests outside Sanaa University, where the dissident general's troops have been deployed since March, local residents said.

Tuesday's announcement came just hours after Saleh's troops opened fire on thousands of pro-democracy demonstrators in the capital killing three people and wounding at least 40 others.

A government crackdown on unarmed protesters in Sanaa has left hundreds dead and thousands wounded since January.

Saleh met with U.S. Ambassador Gerald Feierstein after the U.N. Security Council and the United States both urged him to begin the transfer of power immediately, State Department spokeswoman Victoria Nuland said.

She welcomed the talks but said Saleh must live up to his promises.

"It is a positive step that he called the ambassador in and recommitted to him -- to us, to the international community -- that he intends to sign it," Nuland said.

"So now we look for him to make good on that commitment."

Tuesday's truce was the third ceasefire which crumbled since May between the government and tribal chief Sadiq, whose well-armed tribesman have been engaged in fierce battles with Saleh's troops in al-Hasaba district.

But it was the first declared truce between Saleh and Mohsen, who defected in March.

Mohsen's First Armored Brigade troops have been battling Saleh loyalists in the capital, stoking fears in the international community that Yemen was headed towards civil war.

Saleh has for months refused to step down after 33 years in power, despite repeated regional and international calls for him to do so.

The escalating violence in the country provoked a U.N. resolution last week that called for Saleh to immediately sign the Gulf-brokered power transition plan.

On Monday, Saleh welcomed the U.N. resolution but did not specify when or if he would sign the initiative of the six-nation Gulf Cooperation Council.

Officials told AFP on Tuesday that Saleh was in the process of negotiating to modify the initiative to ensure he remains president until early elections are called.

Meanwhile, gas exports from Yemen's Balhaf terminal on the Gulf of Aden are to resume on Wednesday, Yemen LNG said in a statement, nearly 10 days after they were suspended following an attack on the pipeline.

No immunity for murdering dictators. This man should end up like Qaddafi and so should his sons and his military commanders.