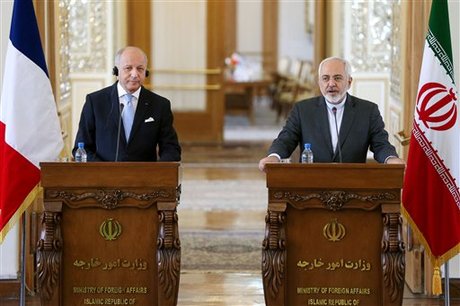 The Iranian sources told pan-Arab daily al-Hayat published on Thursday that Fabius told Zarif about the importance of contacting Lebanese parties that are allied with Iran to urge them to find a solution to the deadlock.

But according to the sources, Zarif said it was not up to the Iranian foreign ministry to interfere in the issue, urging Fabius to discuss the matter with President Hassan Rouhani.

When the French official brought up the issue during his talks with Rouhani, the Iranian leader distanced himself from the matter, bringing up subjects such as the nuclear deal signed between Tehran and world powers earlier this month, the sources told al-Hayat.

The Iranian officials hinted to Fabius that Tehran is not yet ready to use its influence in the region to interfere in Lebanon's presidential crisis as long as the nuclear deal is still in its implementation stage, the newspaper quoted French sources as saying.

France sought Wednesday to relaunch diplomatic ties with Iran in the hope of boosting business in the country, following the key nuclear deal.

Fabius called his one-day visit to Iran "an important trip" and tried to soften tensions created by France's hard line on the nuclear issue.

The July 14 deal between Iran and six world powers — the U.S., Britain, France, Russia, China and Germany — is meant to curb Tehran's nuclear program in exchange for lifting sanctions.

The US/France/UK should have made it a condition that Iran releases its grip on Lebanon, as part of the nuclear agreement. It's too late now. Iran is stronger, Hezbollah is bolder, and Lebanon is weaker.

Why cant we agree among ourselves ? and if we dont agree, then why just not asking the people by having a referendum or direct elections ? This is how it should work if we are stuck, dont you think so ?

The role of Iran in Lebanon is very destructive.

Dear Mr. Fabious
Did you ask Mr. Zarif if mowaten is mentally ill ?

And do we really want Iran to exercise its power to select the next Lebanese President??
While the nuclear agreement is pending in Congress (60) days and may not be approved, Iran needs to keep its existing options open in Lebanon and elsewhere.
So, when is the perfect time for the Lebanese to assert themselves?? Well, its now of course, while Iran is sidelined waiting on the results.
What is Lebanon doing with this window of opportunity that regional events have given them to select their own president? Well of course, they are doing nothing do to the FPM boycott which plays right into the Iranian waiting game strategy. Without FPM paralyzing the Lebanese System, Iran could not otherwise accomplish this result