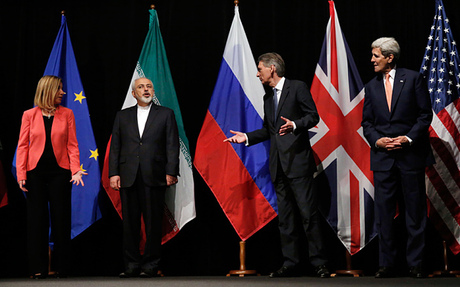 The nuclear deal would see sanctions on Iran lifted in exchange for a new inspections regime and curbs on the country's atomic program.

Iran's parliament and the U.S. Congress need to vote on the agreement struck in Vienna before it can be implemented.

Congress is expected to pass a resolution next month opposing the deal.

President Barack Obama will veto that measure, but Congress could override such a veto -- and kill the deal -- with a two-thirds majority in both the Senate and House of Representatives.

Iranian lawmakers are believed to be waiting to see what Congress decides.

Students chanted slogans against the "U.S. intrusion in Iran" through the agreement, and also against the "weak Majlis (parliament)," which they said has been "a partner in crime with the government" on the issue.

Some held banners calling the deal an "American Trojan horse to infiltrate Iran".

The conservatives questioned the achievements of the deal and said "sanctions remain but our dignity is violated".

The students also protested the arrest of some hardliners Sunday in front of the British embassy in Tehran, which was reopened by Foreign Secretary Philip Hammond the same day.

Around 40 protestors had chanted anti-British slogans, and some were arrested but released later in the day.