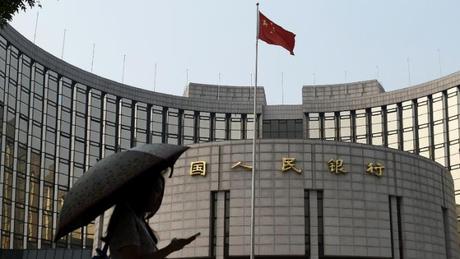 China's central bank on Thursday set its central rate for the yuan currency at a four-year low against the U.S. dollar, a move analysts said reflected reduced expectations for the unit following a devaluation.

The yuan was fixed at 6.4085 to the greenback, according to the China Foreign Exchange Trade System, just 0.07 percent weaker from the previous day. But it was the lowest since August 2011, the Shanghai Securities News said on its website.

The move follows an interest rate cut announced on Tuesday and a slumping stock market, which has fallen more than 40 percent since peaking in mid-June.

"The yuan depreciated as growing market expectations for yuan depreciation have been gradually fulfilled after the one-off devaluation on August 11," Liu Dongliang, a senior analyst at China Merchants Bank in Shenzhen, told Agence France Presse.

The central bank on August 11 devalued the yuan by nearly two percent, saying the decision was aimed at moving towards a more flexible exchange rate though the market interpreted it as a sign of economic weakness. It fell further in the following days.

The yuan is restricted to trading up or down two percent from the daily rate on the national foreign exchange market.

Before the August 11 change, the central bank used to decide its daily yuan reference rate by polling market-makers, but now says it takes into consideration the previous day's close, foreign exchange supply and demand and the rates of major currencies.

At midday on Thursday, the yuan was trading at 6.4091 to the dollar, slightly stronger than Wednesday's close of 6.4095.

The central bank injected 150 billion yuan ($23 billion) into the money market on Thursday, according to a statement, amid recent tight liquidity.