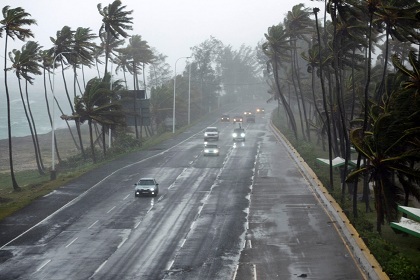 Tropical storm Erika broke up as it raked across Cuba on Saturday, drenching the drought-parched island in heavy rain after killing at least 20 people on the Caribbean island of Dominica.

The Miami-based National Hurricane Center later called off all coastal watches and warnings and said the storm had "dissipated" -- a relief for a dozen Caribbean island nations stalked in recent days by Erika.

But it did caution that Florida should keep an eye on "the remnants."

The storm dumped heavy rains on the Dominican Republic and Haiti in recent days, but its deadliest impact was on the tiny island nation of Dominica, which is still recovering from the assault and where the death toll could yet climb.

Floods and mudslides unleashed by the storm left scenes of devastation in the island of about 72,000 people.

"The visual damage I saw today, I fear, may have set our development process back by 20 years," Dominica Prime Minister Roosevelt Skerrit said Friday after surveying the damage.

"Of greatest concern however, is the loss of life. So far we have confirmed that at least 20 citizens have died, and some are missing," he said.

Highways sustained widespread damage and bridges were washed away, he said.

In Cuba, the heavy rains came as welcome news to an island enduring its worst drought since 1901.

"The rains, at times intense, are received with pleasure, given the intense drought that affects this region since the end of last year," the official Cuban news agency Prensa Latina said.

After pounding Dominica on Friday, Erika let loose on Haiti, where authorities set up emergency shelters across the country.

According to an initial tally, one person was killed in a landslide and two people were injured in the Port-au-Prince region when a house collapsed. Flooding was reported in two regions after heavy rains.

Many homes in Haiti are rickety at best and more than 60,000 people are still living in emergency housing around Port-au-Prince following the country's devastating 2010 earthquake that killed more than 250,000 people and crippled the nation's infrastructure.

Haiti is located on the western half of the island of Hispaniola, which also includes the Dominican Republic.

Dominican Republic authorities had issued a red alert as schools, beaches and ports were closed and civil protection organizations were ordered to be at the ready.