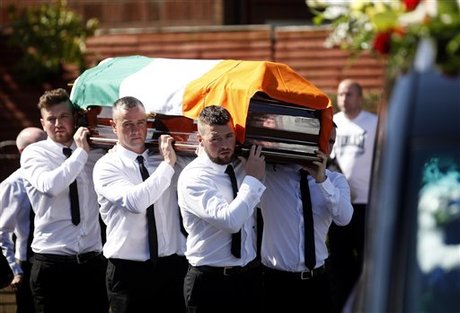 The killing of a former Irish Republican Army militant has revived fears that the notorious paramilitary group is still operating in secret and has shaken Northern Ireland's fragile power-sharing government.

The killing was reminiscent of republican murders sanctioned by the IRA hierarchy in decades past and police investigators said in a statement it showed that some of the IRA's structure "remains broadly in place".

They added, however, that the IRA was "no longer engaged in terrorism" and was instead in criminal activity like other paramilitary groups.

The group waged a campaign of violence to drive Britain out of Northern Ireland until the 1998 pact ended a conflict in which 3,500 people died.

In 2005 the IRA announced it had put its weapons beyond use and largely withdrew from view as the peace process bedded in and a period known as "The Troubles" ended.

But a string of recent paramilitary-style attacks culminating in the McGuigan murder have prompted unionist parties, loyal to Britain, to accuse their government partner Sinn Fein, the former political wing of the IRA, of being dishonest about the IRA's existence.

The Ulster Unionist Party (UUP), a minority partner in Northern Ireland's five-party power-sharing coalition with Sinn Fein, has voted to pull out of the regional government in protest and the larger Democratic Unionists have threatened to do the same.

The UUP minister in the local government was expected to resign on Tuesday and Northern Ireland's First Minister Peter Robinson was due to meet with Prime Minister David Cameron for talks on the political crisis.

But experts said the assertion that the IRA still exists in some form even after years of peace was no revelation and the furore was more about political wrangling ahead of regional elections in 2016.

"If you were paying attention over the last decade you shouldn't really have been surprised by the claims about the IRA," said Brian Feeney, head of history at St Mary's College in Belfast.

Feeney pointed to a series of reports from the Independent Monitoring Commission, set up to observe the winding down of paramilitaries after the 1998 agreement.

"The IMC published a series of reports from 2006 onwards describing how the IRA military structures were being dismantled but that members and former paramilitary members were involved in non-terrorist crime," he told AFP.

While decommissioning weapons was a central part of the 1998 agreement, the issue of IRA disbandment was never comprehensively resolved, according to Brian Rowan, a Belfast-based security analyst.

"In the absence of activity there was no focus on the skeleton IRA structure," he told the BBC.

Michael McDowell, a former Irish justice minister, wrote in the Irish Times last week that Dublin and London did not insist on the IRA ceasing to exist as part of the Good Friday agreement.

"The governments took the view that an inert, freeze-dried husk of the IRA was preferable" to risking the emergence of breakaway dissident factions, he said.

Instead of terrorism, the IRA has been accused in recent years of other criminal enterprises including fuel laundering, cigarette-smuggling and counterfeiting.

"Yes, individuals who used to be in the IRA, or were involved in the struggle in the past are involved in criminality but we can't be held responsible for that," Gerry Kelly, a Northern Ireland Assembly member from Sinn Fein, told AFP.

Kelly, like several Sinn Fein public representatives, is himself a former paramilitary turned vocal proponent of the peace process.

He was sentenced to life in prison for his role in a 1973 bombing outside London's central criminal court but escaped during a mass break-out from Northern Ireland's notorious Maze Prison in 1983 and was later re-arrested.

Gerry Adams, the Sinn Fein president, has accused unionist parties of being motivated by "party political and electoral interests" ahead of next year's elections.

"The war is over and the IRA is gone and is not coming back," Adams said.