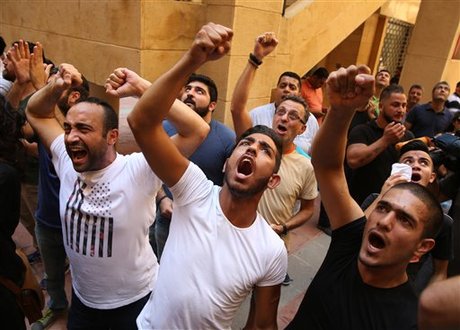 Anti-government demonstrators in Lebanon have staged three large rallies in the past two weeks and a small group Tuesday stormed the environment ministry to press demands for reform. Here's a look at what's behind the protests, the most significant public expression of frustration with Lebanon's dysfunctional system of government in years.

WHAT SPARKED THE PROTESTS?

Malodorous trash piled up on the sidewalks of Beirut in August after the government closed a main landfill, suspending garbage collection. The trash became a pungent reminder that the government has failed since the end of the 1975-90 civil war to provide basic services such as a steady flow of water and electricity. Some garbage has been cleared, taken to temporary sites or dumped illegally, but the Cabinet has not found a permanent solution.

WHO ARE THE PROTESTERS?

Demonstrators come from all segments of Lebanese society, forming an ad hoc coalition that transcends sectarian and class divides. The movement has little structure, though a small leadership group has emerged, including young business people and professionals. Using social media, they've harnessed the public's anger around the slogan "You Stink!" — a reference to the country's veteran leaders, including warlords-turned-politicians.

WHAT DO THEY WANT?

The protesters don't have clear shared objectives or a strategy and timetable for achieving them. Some have called for the resignation of the current Cabinet or specifically of the environment minister. Others seek long-overdue parliament elections or a complete overhaul of the country's sectarian-based political system. After the most recent rally Saturday, some organizers said they would escalate protests unless the environment minister resigns by Tuesday night. Around midday Tuesday, about 30 protesters stormed the environment ministry to press their resignation demands. So far, the minister has only resigned from a government committee assigned to resolve the trash crisis

WHAT'S BEHIND THE POLITICAL GRIDLOCK?

Lebanon is made up of more than a dozen religious sects, including various Christian denominations as well as Sunni and Shiite Muslims. Traditionally, the prime minister has been a Sunni, the president a Maronite Christian and the parliament speaker a Shiite. The sectarian quota system also is applied widely in public life. The system was meant to keep the peace, particularly following Lebanon's 15-year civil war, but has fostered patronage and weakened state institutions. The Syrian civil war has thrown Lebanon's shaky political arrangements further into disarray. Since 2011, more than 1 million Syrian refugees have poured into Lebanon, while Hizbullah became involved in fighting in Syria. Amid mounting external and internal threats, squabbling politicians have been unable to agree on a date for overdue parliament elections, last held in 2009, or on a new president.

HOW HAVE THE POLITICIANS RESPONDED TO THE PROTESTS?

Veteran politicians say some of the protesters' complaints are legitimate, but reject calls for the resignation of the government. Speaker Nabih Berri has called for talks between the prime minister and various party chiefs in coming days, an idea endorsed by Hizbullah, the leader of Lebanon's main Sunni party Saad Hariri and the leader of the Druze sect, Walid Jumblat. It's unclear how such talks would break the deadlock when similar efforts have failed. Protest organizers say they fear veteran politicians will try to hijack their movement or weaken it with vague promises.

COULD THE PROTESTS FURTHER DESTABILIZE LEBANON?

Lebanon sat out the Arab Spring uprisings of 2011, in part because of the bitter memories of the civil war. The organizers of the current protests say they want to avoid chaos, but violent clashes erupted during the first two rallies. With Lebanon already extremely fragile, especially since the outbreak of the Syrian civil war, the situation easily could spin out of control. At the same time, it's not clear if the protesters can keep up momentum.

Only the population of this country if united and indeed provided "from all segments from the Lebanese society", can end the feudal era which through divide and rule practice , corruption , and hidden discrimination brought suffering and misery to the majority of the Lebanese people. Sincerely wish them perseverance.