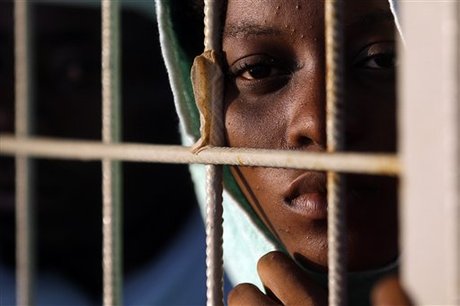 From his office in Strasbourg in eastern France, Hatem Gheribi picks up the phone to a desperate woman who says she has washed up on a tiny Greek island.

As part of the "Watch the Med" team, Gheribi answers lots of calls like this.

The women talks rapidly in Arabic, saying she is on the islet with several hundred other migrants and refugees.

Looking over Gheribi's shoulder is Pavlos Antoniadis, a Greek musicologist from the University of Strasbourg, who is soon on the phone to the Greek police, passing on all the information they have.

"This system saves lives," says Antoniadis. "Civil society has a role to play in overseeing how the authorities carry out their duties."

While Antoniadis is persuading the Greek police of the urgency of the situation, his colleague is trying to pinpoint the source of an earlier call.

"For the first call I received, we didn't have a GPS position, but the man sent me a photo," says Gheribi, bringing up an image of several men, women and children huddled on the deck of a boat.

Another member of the team, in Tunisia, starts putting together a simulation based on the apparent size of the boat and the information they have about the departure point, the currents and the wind in the area -- narrowing down the possibilities for the coastguard.

Formed by a group of activists and researchers in 2012, "Watch the Med" has around 100 volunteers dotted around Europe, North Africa and the United States, although Germans make up the biggest number.

Their hotline number -- +33 4865 17161 -- has been widely distributed around destination and departure hotspots, and has spread fast among the migrant community via social media and word of mouth.

In Strasbourg, much of the work is done by members of the Maghreb Workers of France group, each volunteering for three of four shifts a month, although Gheribi says he does a bit more, especially during the busy summer season.

"As European citizens, we have a right to watch and critique Frontex," he says, referring to the EU's border agency.

The global team of volunteers work out their timetable via the Internet and fed into a coordinator based in Italy. Each gives a few hours of their time each week to ensure the phones are manned 24 hours a day.

Some alerts come indirectly. Mussie Zerai, a well-known priest from Eritrea, regularly passes on distress calls to Watch the Med. The brutal regime in Eritrea is one of the main causes of migration into Europe, and Zerai's number is passed widely around Eritreans on the move.

The NGO also keeps track of rights violations, mapping their location. It states its ultimate goal as "contributing to ending the deaths of migrants at sea and promoting an alternative vision for the Mediterranean".

They have their work cut out. Latest figures from the International Organization for Migration showed that more than 350,000 people have crossed the Mediterranean since January, and more than 2,600 have died in the process.