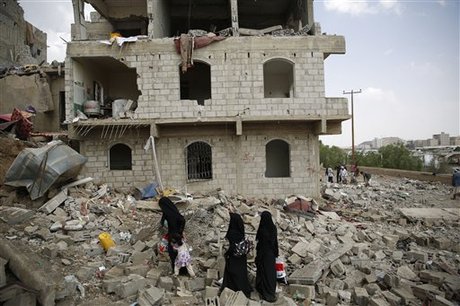 The Yemen war is entering a new and potentially decisive phase as Gulf nations build up ground forces to battle rebels in the country's north and rebel-held capital, analysts say.

After five months of air strikes by a Saudi-led coalition and ground combat between Iran-backed rebels and coalition-supported fighters, Yemen "is bracing for a new and more deadly phase of violence in the north", said April Longley Alley of the International Crisis Group.

"Both sides are gearing up for a major conflict in the north and especially in Sanaa."

Overnight and on Tuesday, coalition warplanes pounded rebel positions in Sanaa amid the build-up.

The Shiite Huthi rebels, who have long complained of marginalization, swept down from their northern mountainous stronghold last year to seize Sanaa unopposed.

Months of air strikes failed to dislodge the Huthis, however.

Then, in July, the rebels were hit by major setbacks after the coalition, according to military sources, sent in armour, troops and Yemeni fighters trained in Saudi Arabia.

Anti-rebel forces have since retaken Aden and four other southern provinces.

The coalition appears determined to recover yet more territory, especially since Friday's killing of dozens of coalition troops in a Tochka missile strike on their Safer base in Marib province east of Sanaa, Alley said.

The death of 45 soldiers from the United Arab Emirates, 10 from Saudi Arabia and five from Bahrain was by far the greatest loss suffered by the coalition -- and highlighted the extent of its involvement on the ground.

Marib has become a strategic location for reinforcements from Saudi Arabia, Qatar and the Gulf, according to media reports and Yemeni military sources.

The missile attack shocked the Gulf states, but the coalition vowed to press on.

Riyadh formed the Arab alliance in response to fears that the Huthis would take over all of Yemen and move it into the orbit of Sunni Saudi Arabia's Shiite regional rival Iran.

The Tochka attack was "a turning point", said Andreas Krieg, a consultant to the Qatari armed forces and a lecturer at King's College in London.

He said the coalition "will prepare a greater deployment of ground troops" to support local forces trained and equipped over the past six months.

"There will be a push from the north and the south towards Sanaa."

Krieg estimates "there are slightly more than 5,000 coalition troops in total on the ground", but the exact figure is unknown "because of the range of special forces deployed".

Although the Huthis claimed the Tochka attack, Krieg said such a complex ballistic missile system was under the control of rebel-allied troops loyal to former president Ali Abdullah Saleh.

"The coalition has to accept that they have not been successful in identifying and eliminating all missile sites," despite saying earlier in the campaign that most of the missile threat to neighboring countries had been removed.

So far, the coalition offensive on the ground has succeeded because local forces are operating on friendly territory, Krieg said.

"Sanaa and the northern provinces will be highly hostile to these forces. So it is difficult to predict what turn the operation takes from here," he said.

"A battle in north Yemen promises to be a prolonged, bloody affair that will worsen the already desperate humanitarian situation," she said.

According to the United Nations, 80 percent of impoverished Yemen's people need aid.

"A complete victory over the Huthis in the north will be difficult if not impossible," Alley said, calling for a compromise to bring the insurgents into the political system.

She said that in August the Huthis offered "significant political concessions" including a willingness to work under U.N. Security Council resolution 2216 calling for their withdrawal from territory they have seized.

The coalition insists that 2216 should be the basis of a solution.

Mathieu Guidere, an Arab geopolitics expert at France's University of Toulouse, sees no immediate chance of a negotiated settlement.

"A political solution will only be put in place in the case of a military victory by one side or the other," he said.