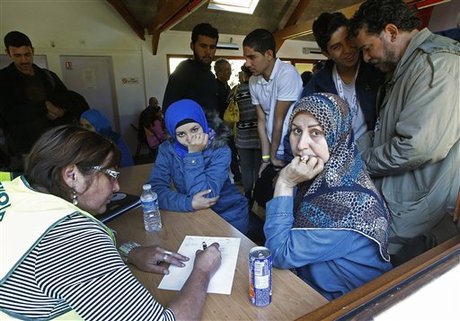 A flood of desperate refugees and images of a toddler lying dead on a beach have thrown Syria's chaos into stark relief, but global powers are still far from seeing eye-to-eye on a solution to the conflict.

Despite a renewed sense of urgency, major players in the West, Gulf, Russia and Iran are pursuing vastly different military and diplomatic tactics on the Syrian crisis.

As political pressure mounts over the refugee exodus and the jihadist threat posed by the Islamic State group, both France and Australia are planning to extend a bombing campaign against the jihadists to Syria.

And after killing two British jihadists in a drone attack in Syria, Britain is also mulling air strikes there.

Middle East experts say the narrow focus on IS is a mistake, and that efforts should concentrate on dealing with Syrian President Bashar Assad after a four-year civil war that has turned cities to rubble and left 240,000 dead.

"It is not a problem of capability, it is a problem of strategy," said Emile Hokayem of the International Institute for Strategic Studies (IISS).

"Adding more British, French, Australian planes will destroy more IS targets but is not going to deal with the fundamental problems of why IS is expanding."

The three countries are already bombing IS targets in Iraq but had resisted joining the US, Canada and Gulf allies in doing the same in Syria so as not to provide support to Assad.

More than a year after the campaign was launched, and thousands of air strikes later, the coalition has failed to stop IS from seizing the key Iraqi city of Ramadi and Syria's Palmyra, home to a UNESCO-listed world heritage site.

"The coalition air strikes have changed nothing... we ask ourselves if they are even necessary," said Claire Talon of the International Federation of Human Rights.

While the countries involved, many of whom have prickly relations, agree that IS is the enemy, they cannot agree on Assad's role in any resolution to Syria's civil war.

"The fact that they have the same enemy doesn't mean that they all give the same priority to fighting that enemy the same way," said Hokayem.

"We still see very fundamental divergences between the US, Turkey, the Gulf states."

And hopes that Iran's return to the international fold after a nuclear deal with the West could lead to a fresh diplomatic push -- along with efforts by Russia to resolve the crisis -- are likely to fall flat.

"If anything, both Russia and Iran are doubling down in their support for Assad at this point," said Hokayem.

While the coalition is focused on combating IS in general, Russia is pushing for a diplomatic solution in Syria that would include Assad and fears are growing in Washington that Moscow is boosting military support to the regime.

The West, the Syrian opposition and some regional powers, including Saudi Arabia, believe Assad must step down immediately for there to be any hope of reconciliation.

Iran, which provides financial and military support to Syria, has also proposed a peace plan to end the four-year war but insists any initiative to end the conflict would have to recognize "the pivotal role of Assad".

"I don't see them becoming more accommodating on this. To the contrary, I think they are committed to Assad's survival," said Hokayem.

Jeffrey White of the Washington Institute for Near East Policy agreed, saying the lifting of pressure on Iran will merely allow them to "devote more resources" to the war in Syria.

The U.N. Security Council last month adopted a new push for peace in Syria, where an uprising against Assad's government in 2011 evolved into a civil war.

But White is pessimistic about the chances of an imminent diplomatic solution.

Both White and Hokayem argue that it is not the IS jihadists that are pushing Syrians to flee, but the war waged by Assad, whose forces have waged air campaigns that have left many Syrian cities in ruins.

The U.N. refugee agency estimated some 5.6 million Syrians are internally displaced while some four million have fled the country.

"It's Assad that is at the base of the problem... and I think people in general are becoming more aware that he needs to be dealt with and not spend so much time worrying about IS and so on," said White.

Hokayem said: "The prism through which the crisis is seen is the wrong one.