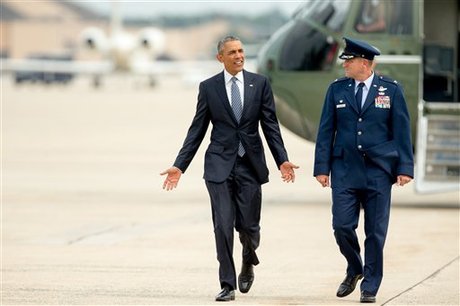 U.S. President Barack Obama traveled to the political battleground state of Iowa Monday, bringing a pro-middle class message that Democrats hope will resonate in the 2016 election.

With the campaign to succeed him well underway, Obama will appear on the campaign trail in Des Moines to promote a new education initiative.

He will take part in a campaign-style "town hall" discussion with students and parents on the costs of university.

Iowans in January will be the first to vote in party elections to select a nominee to become president.

Many of the leading contenders have been camped out in the state for months already, eating corn dogs, shaking hands and generally wooing voters accustomed to being personally wooed by candidates.

Ahead of the visit, Obama’s White House rolled out a new initiative to help Americans decide whether incurring the massive debt associated with a college degree is worth it.

The score card rates each university on a number of metrics, including graduates' ability to pay their student debt.

The plan echoed Hillary Clinton’s campaign message of fighting for "everyday Americans" and a pledge to "restore the basic bargain in America."

Clinton's continued weakness has roiled the Democratic establishment; with many casting around for a safety net candidate should she falter further.

On the eve of Obama's visit, Clinton unveiled a new ad campaign, positing her as the champion of the middle class.

On Monday, she will appear in two campuses in Iowa to reinforce that message and perhaps echo Obama's message.

Republicans are also getting in on the act.

Marco Rubio published an opinion article in the local paper, the Des Moines Register, on the morning of Obama's arrival.

"There is no reason our people should still have to spend tens of thousands of dollars and four years on a campus to earn degrees."