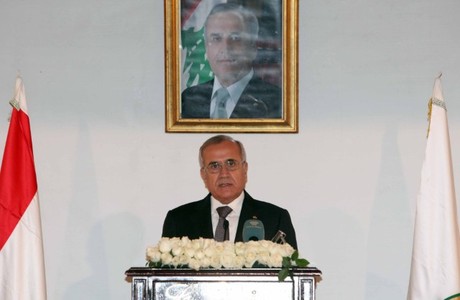 President Michel Suleiman stressed on Monday that Lebanon “should fund” the Special Tribunal for Lebanon ruling out any threat if the cabinet doesn’t pay Lebanon’s share to the court.

In remarks to Ad-Diyar daily, Suleiman said that Lebanon is characterized by its commitment to the United Nations legitimacy and its international resolutions.

There is no alternative to this commitment to protect Lebanon and its stability, he said.

“We should fund the tribunal and funding it doesn’t mean that we would give up our criticism of it if it makes mistakes,” Suleiman told Ad-Diyar. “It made a mistake in leaking the investigation and the indictment.”

Asked if Lebanese officials had received any warnings if they failed to fund the STL, Suleiman abruptly said: “I am Lebanon’s president and no one threatens me or warns me.”

“There is a diplomatic way in asking about Lebanon’s stance from the implementation of international resolutions,” he stressed.

Lebanon’s annual share to the Netherlands-based tribunal for 2011 amounts to about $33 million or 49 percent of the court's budget. The STL has indicted four Hizbullah members in ex-Premier Rafik Hariri’s Feb. 2005 assassination case.

The party and its ally the Free Patriotic Movement have rejected to fund the court while Suleiman, Premier Najib Miqati and Progressive Socialist Party chief Walid Jumblat have called for paying Lebanon’s share to preserve stability.

“This is not true because I have previously signed two decrees to promote al-Hassan,” he told Ad-Diyar.

Suleiman also denied that he was at loggerheads with FPM chief Michel Aoun over the Christian posts in state institutions.

He said the delay in appointing Christian civil servants to several top posts was the result of the involved ministers’ procrastination in announcing their candidates.

Let us wait and see

what a fillet, ie no back bone

good this man sometimes say things so it reminds me there is a president in this country....

Well Mr.President, they did threaten you and warn you!!