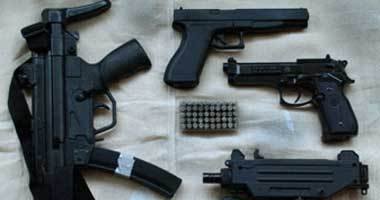 VDL said Mohammed Shaker Toufiq was arrested in the early hours of Monday.

The news came two days after the General Security Department confirmed the arrest of another Syrian citizen on charges of arms smuggling.

In a communiqué issued late Saturday, the department’s general directorate dismissed a report by Future TV that Amer Omar Adib was arrested “without any justification.”

The General Security Department arrested Adib on charges of smuggling arms between Syria and Lebanon and was referred to the judiciary after he admitted to the charges, the communiqué said.

A security source dismissed to An Nahar daily on Monday what he called the “misleading” campaign against General Security.

He said Adib is part of a ring that extorts money from Syrian expatriates in a Gulf country and buys light weapons and ammunition from the Lebanese black market.

The arms are later transported to a Lebanese-Syrian border area in the eastern Bekaa Valley and handed to smugglers who would transfer them to areas witnessing security incidents in Syria.

this story is absolute nonesense. If the ring was smuggling weapons from Lebanon to Syria across the border in Bekaa why would he have weapons with him in the airport? Clearly these charges are BS.

Well well... it seems that we are suddenly very good at catching those smuggling weapons into Syria, but we never caught a single bullet smuggled in Lebanon during 35 years...
What a farce this is!

..... The man was arrested by hizb of thugs initially and questioned for 2 days. Upon his release, he was arrested by the Amn AL Aam at the airport. He had no weapons. He is anti assad and an activist. If anybody is smuggling arms into Syria, it is the son of sheikh mohamad yezbik of hizb who is profiteering from this illegal trade. As to the claim he confessed, hehehehhe.... well, we know how that goes!!!

how can anyone smuggle arms through airport security?

who the F**K mentioned that he had weapons with him when he was arrested? guys please read the article rather than looking at pictures. same thing applies to politics...understand the issues prior to analyzing them!

..... so why arrest him if he had not broken any lebanese laws? Is there an international arrest warrant against him? I think not...... He was simply arrested coz he is an activist and his name appears on a list provided by the syrians to their friends in the lebanese General Security..... Plain and Simple!

Black market? What? Really? In Lebanon??? OMG, imagine that!!!! Below par reporting by Naharnet, mixed with smoke screens and mirrors, mixed with comments for the genius Mowaten IRANI, mixed with moderators who deletes posts they disagree with, blatant and total disregard for the terms of service, and what do we have? Only God knows. It's not even good theater anymore!!! What a charade.

I am unhappy because people like you are feeding on our freedom, encroaching on our way of life and subverting our will with your illegal guns. I suggest instead of me jumping off a bridge, that you pay your electric bill, act like a Lebanese, love your country, instead of IRAN and say no to illegal militia and illegal guns.

@ mowaten IRANI, if you don't have a gun it is because you hide behind the Iranian guns of your illegitimate militia and you don't need one, they are doing your dirty work for you. The thumbs down on everything your say should be a clear indication of how far off track you are as a citizen of Lebanon. You are derelict in your patriotism and duties and loyal to a foreign country that is directly responsible for the 2006 war which cost 1200 lives and the destruction of our infrastructure, yet with have the nerve to claim divine victory. Shame on you, shame on your attitude and shame on you lack of respect for what is right. As long as you stick around, I will lecture because someone has to.

@ mowaten IRANI, you forgot to also accuse me of being an Israeli spy. Are you slacking off on the job? This is the problem with people like you, you cannot debate yourselves out of a discussion putting you in a negative light, so you resort to fabrications and accusations that make no sense.

I do not expect different from an atheist but I do expect much more from someone who claims to be Lebanese. The only thing you are a “mowaten” of is IRAN. Grow up or take you ball and go play outside with people of your own age. The reality is simple, if your illegal militia was not black mailing us with their guns and threats of violence Lebanon would be "bi alf kheir" by now.

"Loving Lebanon doesnt mean I have to hate everyone"
I like your declaration Mowaten, unfortunately we are all prisoners of our reality, it's very true for you too, I hope you don't think you are more objective than others.

@Mouwaten: 2006 and Israel is in Israel was there a communique from Iran to the Militia to kidnap Zionists and destroy the entire Infrastructure so that we create a problem and $50 billion debt whether the donator were Saudis or Iranian. YOU must admit that YOUR masters created the problem to begin with.
Do not destroy my house and send me money to rebuild it because nothing replaces anything. Just wondered how much money did Iran pay for the 3000 Martyrs? From where I come from human being are worth too much and money will not pay losing a life of a human.

Now, Charbel (The Minister of Interior) is saying the Syrian was arrested for "financial" reasons and not political. So, what is the scoop here???

Mowaten the Irani:
Question, why from the beginning Lebanon required help to recover the destruction of 2006 war? was it really necessary for Lebanon to suffer all this destruction and loses of lives?
This is the result of keeping an Irani supported terror gang.
Lebanon is kept as a prisoner in its own state and nobody has the power to disarm the terror gang.
What benefit it brings to Lebanon we can all see, how the majority of the People of Lebanon hate this gang and prefer keeping the border along with its neighbor Israel quiet (if not in peace).
Don't tell us your Iranian propaganda how this terror group is defending Lebanon from the "ZIONI" aggression as if Lebanon was not opening its legs and allowing terror groups to enter and turning it into a warm nest for actions against Israel it have been remain intact, same as was from many years since 1948,
Iran is not the protector of Lebanon it will bring her into destruction more times in case border will not be kept quiet.