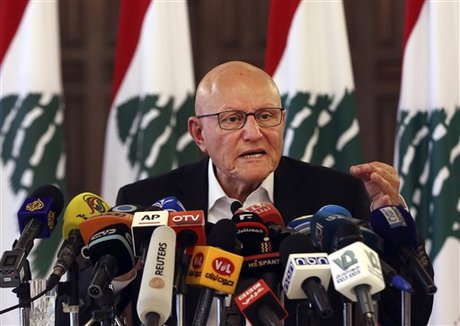 Prime Minister Tammam Salam traveled to New York on Thursday heading the Lebanese delegation that would represent Lebanon at the U.N. General Assembly and the meeting of the International Support Group for Lebanon.

Salam is expected first to attend a session during which Pope Francis will address the U.N. on Friday.

The premier is also scheduled to attend the opening of the U.N. Sustainable Development Summit during which he will give a speech.

On Monday, the General Assembly session will officially kick off and the next day a summit on fighting extremism will be held during which leaders, including U.S. President Barack Obama and Salam will give speeches.

The PM will also address the General Assembly and the International Support Group for Lebanon on Wednesday before returning to Lebanon.

He is expected to focus in his speeches on urging countries of influence to help Lebanon overcome its political crises by electing a new president.

He will also call for more support to the Lebanese army to boost its role against terrorism and urge further assistance to help Lebanon confront the burden of Syrian refugees.

Salam is expected to hold meetings with top world leaders on the sidelines of the General Assembly.

so many things to do in Lebanon and yet he goes on a trip to new York... hypocrisy at its best esp. he is "to attend the opening of the U.N. Sustainable Development Summit during which he will give a speech." when he and his fellow politicians did NOTHING to preserve lebanese environment...
the waste file is just a scam as they could have solve it years ago... NGOs were never heard yet they have sustainable plans through which the gvt can even make money! but no, they prefer their plan in order to steal more and more... throw the garbage into the sea then sell the new "land" to build sea resorts ma hek? tfeh....

Mr. Salam, you are a good man, an honest man, a real patriot who has a very difficult task being our PM, but my dear Mr. Salam, in NY do not mince your words, say things exactly as they are, you are known for being honest so say it as it is, as you see it. With your decency, honesty, education and Savoir Faire, you could tilt the scales in favor of Lebanon and have the weight of the international community behind us. Just be blunt, direct and right on the spot. A whole nation rests on your shoulders now Sir.

As a mentally challenged retarded Iranian Boots lover, being stamped is one of your daily twisted rituals as acts of obedience to Khaminai the supreme looser.
Also,
Go and check on your MUSARDEB in the da7yeh, Your smaller LEADER, YOUR IDEAL, This Little looser, is Spending the majority of his miserable life stuck to Da7yeh sewers instead he should have been in his village cultivating Hashish for your already fried brains.

Those are the powers Salam is dealing with, "MTV channel" covering the Ali Baba of Hizbolah and Co. here is the written article: