Pope in Philadelphia on Final Leg of U.S. Tour 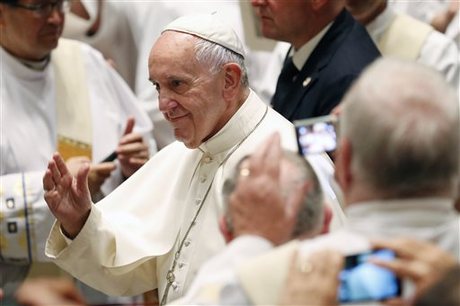 Pope Francis arrived in Philadelphia Saturday for the final leg of his triumphal tour of the United States, with hundreds of thousands expected to turn out for his weekend visit focused on families.

The head of the world's 1.2 billion Catholics landed in the City of Brotherly Love after a short flight from New York, where he spent a whirlwind 36 hours that included an emotional visit to Ground Zero and mass at Madison Square Garden.

The 78-year-old Argentine pontiff is ending a historic visit to Cuba and the United States this weekend with a packed schedule in Philadelphia, including two appearances at the Festival of Families, an international gathering of Catholics.

At the airport in Philadelphia, he walked down the steps of the jet and onto the red carpet to embrace members of the clergy and greet local dignitaries with a beaming smile on the fifth of six days in the United States.

The pontiff then got into the back seat of his modest Fiat, waving to the crowd as a band played welcoming music on the tarmac.

But at the sight of a child in a wheelchair close to the security barrier, he got out of the car and walked over to bless the child. He said a few words to the child's mother, who appeared moved almost to tears.

Francis then headed straight to mass at the Cathedral Basilica of Saints Peter and Paul, where people slept in the street overnight, having travelled far and wide in the hope of seeing him.

"We pray for you every day," said one sign held by a woman in her 50s who waited all night.

Philadelphia is under a security lockdown, with traffic banned downtown for the entire weekend and thousands of National Guardsmen in the streets.

Later Saturday, Francis, the first pope from Latin America, is due to address immigrants at the city's historic Independence Hall before greeting huge crowds at the Festival of Families, a Catholic event that takes place every three years.

"I wanted to be part of this family celebration," said 42-year-old Luis Ortiz, who slept outside with his 11 children near the cathedral.

On Sunday, he will meet with American bishops, visit a prison and lead a farewell mass on the sweeping Benjamin Franklin Parkway, the city's grandest avenue, before flying out of the country in the evening.

The pope has received a rapturous reception in America -- he was welcomed personally by President Barack Obama when he arrived on Tuesday and by giant crowds in both Washington and the Big Apple.

His reform-minded approach to social issues, humility and focus on the most vulnerable has struck a chord across the racial and socioeconomic divide in the United States.

New York treated the pontiff to a rock-star welcome, shutting down the city with draconian security measures to allow him ease of movement.

A sea of 80,000 people screamed out in joy as he proceeded through Central Park in his popemobile before celebrating mass at Madison Square Garden.

Around 20,000 people packed into New York's premier concert venue and home of the Knicks basketball team, after Billy Joel, who was originally booked for Friday night, shifted his schedule.

Once again, the pope focused on society's poorest, in a message voiced time and again in America's financial capital, a city of staggering wealth but also need.

He called on worshippers not to forget "the faces of all those people who don't appear to belong, or are second-class citizens."

"They are the foreigners, the children who go without schooling, those deprived of medical insurance, the homeless, the forgotten elderly," the pope said.

At the city's somber September 11 Memorial, he laid a white rose and led a gathering of 700 in multi-faith prayers for world peace and paid tribute to the nearly 3,000 victims killed in the 2001 attacks.

Francis was welcomed in song and laughter on a heartwarming visit to a Catholic school in New York's East Harlem neighborhood.

Beaming and relaxed, even submitting to a selfie or two, the pope seemed to come alive during the hour he spent with the children at Our Lady, Queen of Angels school, where he also met migrant workers.

It was a stark contrast to the austere surroundings of the U.N. General Assembly, where he offered his vision of a better world.

Francis touched on the persecution of Christians in the Middle East, the Iran nuclear deal, drug trafficking -- "silently killing millions" -- and the rights of girls to an education.

As he did at the U.S. Congress, the pope gave a passionate plea to protect the environment, as he voiced confidence that a looming U.N. summit on climate change would reach "effective" agreement in Paris.

He also offered a strong endorsement of Iran's agreement with the United States and five other world powers to limit its nuclear program -- a deal vehemently opposed by many U.S. lawmakers.