Akkar Protesters Vow to Stand in Way of Waste Trucks 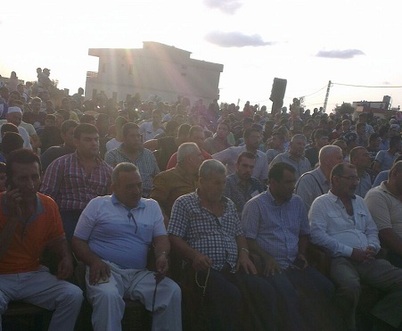 Akkar anti-trash activists organized a new sit-in on Wednesday to reject government plans to set up a so-called sanitary garbage landfill in the Akkar town of Srar.

The sit-in that was held in the Akkar town of Shir Hmayrin was organized by the “Akkar is Not a Dump” campaign and other activists amid a participation by a number of municipalities and mayors from the region.

“The towns and villages in the vicinity of the Srar landfill reject the dumping of additional quantities of garbage in this site, which has caused major environmental and health hazards,” a municipal chief said at the sit-in.

Speaking in the name of the “Akkar is Not a Dump” campaign, the activist Bernard Obeid stressed that “Akkar will not be a dump and Akkar's sons will stand in the way of the trucks that will transport the garbage” from other regions.

He also declared an open-ended sit-in and pledged that all garbage trucks will be sent back to the areas they may come from, underlining that “it is unacceptable to put the burden of the garbage of entire Lebanon on Akkar's shoulders.”

After he announced his plan earlier this month, the civil society and local residents of Akkar, Naameh, Majdal Anjar, and Bourj Hammoud protested against the step.

Illiterate short sighted Lebanese majority . We are living in garbage because of a weak government that doesn't implement its decisions !!!!!!!
ABOUT TIME TO LEAVE THE GARBAGE STATE FOR GARBAGE POEPLE