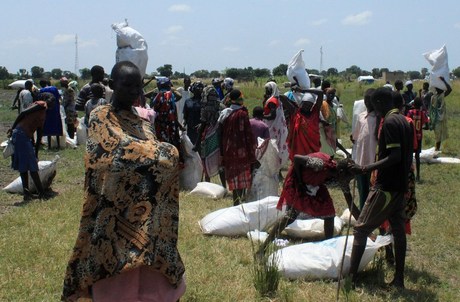 On paper, the war is over in South Sudan, after rivals signed a peace deal to end 21-months of violence that left tens of thousands killed.

But here in the swamps of Koch in the northern battleground state of Unity, the political deal means little in lands where fighting, rape and the burning of homes has not stopped, worsening hunger levels already bordering on famine.

"We search for water lilies and wild plants for food," Gai told AFP, saying that the aid rations will last a short time, and she must then go back to gathering grass to fill the bellies of her children.

Gai is a widow: her husband was killed in a civil war marked by widespread atrocities on both sides, and in which civilians have borne the brunt of the fighting.

Both sides are accused of having perpetrated ethnic massacres, recruited and killed children and carried out widespread rape, torture and forced displacement of populations to "cleanse" areas of their opponents.

A year ago famine was averted only after a huge intervention by aid agencies.

Now aid agencies warn that while some areas are improving as crops ripen, other areas where war has forced the people to flee into remote swamps are on the edge of disaster.

The UN Food and Agriculture Organization  (FAO) warns of "isolated cases of starvation" in parts of Unity and Upper Nile states -- once the country's main oil producing states, now the epicentre of violence -- which it lists as "one of the  world's worst humanitarian and food security situations."

Parts of both states are already classified as being one step short of famine, according to the last technical assessment made in April.

"Their conditions are likely to have deteriorated further," FAO said in its latest report this month.

Lack of basic road infrastructure in South Sudan means that food often has to be airdropped or delivered by river barge to reach needy people uprooted by fighting.

The village of Koch is now in government hands, but surrounding villages are held by rebels, although U.N. aid workers have now managed to deliver aid after four months of war blocked access.

Many of the thousands who have fled here are living in basic shelters with small pieces of plastic sheeting to keep off rain. Some aid has arrived, but the people are still struggling.

"The houses were all burnt," said Rhusia Nyalou, a 37-year old mother of eight. "The fighting goes on, the cows were all taken, life is not good here."

Three of her children fled as refugees with relatives north to Sudan, one is living in the vast U.N. base in the state capital Bentiu, a crowded camp of some 117,000 people protected by armed peacekeepers.

Her four remaining children, like her, struggle to survive, living off grasses they collect and WFP food.

"We eat any grass that makes food, but the children are suffering badly," she said, adding that even when they have enough to eat, they fear constant attacks from gunmen.

South Sudan descended into bloodshed in December 2013 when President Salva Kiir accused Riek Machar, who he had sacked as his deputy six months previously, of planning a coup.

The army and rebels have repeatedly traded blame, accusing each other of breaking an internationally-brokered August 26 ceasefire deal, the eighth such agreement to have been signed since civil war broke out in December 2013.

But conditions on the ground remain as bad as ever.

Aid workers say they fear "pockets" of possible famine - a disaster caused by war, not by climatic conditions.

Famine means at least 20 percent of households face extreme food shortages, acute malnutrition in over 30 percent of people, and two deaths per 10,000 people every day, according to the U.N. technical definition.

"The people have suffered greatly during the conflict, and its time for it to be over," U.S. Ambassador to South Sudan Mary Catherine Phee said. "Each side accuses the other side of attacks... there is more work to be done to bring peace."