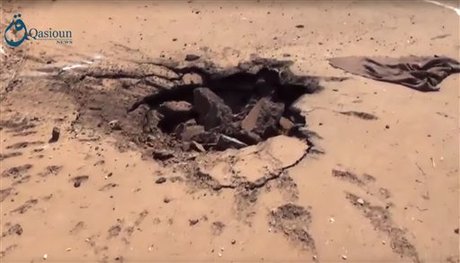 A snapshot of developments since Russia's first air strikes on Syria, an intervention the West says is directed more at regime opponents than Islamic State group jihadists.

The Russian defense ministry says Moscow has sent more than 50 military aircraft as well as marines, paratroopers and special forces to Syria.

- A Syrian security source says Russian and Syrian warplanes strike "terrorist positions" in the provinces of Hama in the northwest and Homs in the center.

- Putin says Moscow must act preemptively to destroy jihadists in Syria before they present a threat closer to home. He also says Assad must be ready for compromise with the opposition.

- Russia's strikes will not alter the strategy of the U.S.-led coalition fighting IS, American officials say. Secretary of State John Kerry says Washington does not oppose Russian air strikes if they target IS, but Assad must step down. U.S. Defense Secretary Ashton Carter says the strikes "probably" did not target IS.

- Russia presents a U.N. draft resolution to the Security Council on countering "terrorism."

- The Observatory says two children were among at least seven civilians killed in air strikes by Russian warplanes in Idlib. The IS is not present in Idlib, has only a marginal presence in Hama and in Homs is present only in desert areas and the ancient town of Palmyra.

- Lavrov says Russia sees "eye to eye" with the U.S.-led coalition on hitting targets in Syria linked to IS, al-Nusra Front and other "terrorist" groups.

- The U.S. Pentagon and Russian military discuss how to avoid mishaps between planes from the U.S.-led coalition and Moscow.

- Russian warplanes carry out their first air strikes on IS' main Syrian bastion of Raqa, killing at least 12 members of the group, the Observatory says. The defense ministry in Moscow confirms it has also staged raids on the provinces of Aleppo in the north, Idlib and Hama.

- A Syrian security source says Russian planes attacked military positions and command centers held by the Army of Conquest in Jisr al-Shughur. The al-Nusra-headed group fiercely opposes both IS and Assad's regime.

- Russian strikes also targeted the ancient Christian town of al-Qaryatain in Homs province seized by IS on August 5, a Syrian military source says.

- Seven members of the coalition -- the United States, Britain, France, Germany, Qatar, Saudi Arabia and Turkey, urge Russia to stop attacks on the Syrian opposition and civilians and focus on fighting IS.

- Russian air strikes in Syria will last for three to four months and will intensify, says Alexei Pushkov, head of the foreign affairs committee of Russia's lower house of parliament.