If not now, when? America's Endless Gun Control Debate 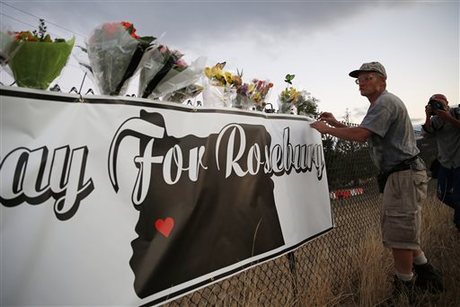 Since America's latest school carnage the debate on gun control has flared anew, as every time a mass shooting rocks the nation. The arguments are well-rehearsed, the rival positions seemingly irreconcilable.

President Barack Obama has led renewed calls for a comprehensive reform in the wake of the community college shooting in Oregon, but gun control advocates doubt the status quo will shift an inch.

"Any expectation of real change in the foreseeable future is just wishful thinking," said Jimmy Taylor, a sociologist at Ohio University and author of "American Gun Culture."

On one side of the debate are gun rights activists who invoke the Second Amendment to the U.S. Constitution to oppose any attempt to restrict access to guns or to control where they can be taken.

Their argument hinges on two key premises: no law can prevent criminals or the mentally unstable from getting their hands on a gun or opening fire; faced with these real threats, law-abiding citizens need guns to protect themselves.

On the other side are the outraged gun control advocates, who have lost hope of passing meaningful national reform through the Republican-controlled Congress.

Instead, they are focusing their fire on state and local governments in the hopes of attaining more limited goals.

One battle has been pushing for universal background checks prior to gun purchases, a measure recently adopted in Oregon along with 18 of the 50 U.S. states. Elsewhere, the measure has remained out of reach despite having support from a vast majority of Americans.

As for major reform, even with a major push from the president, there are simply too many legislative and legal hurdles to passing significant gun controls, Taylor told AFP.

Meanwhile, the sheer number of firearms already in circulation in the country -- 270 million -- and the number of people with undetected or badly-treated mental illnesses, would seem to make it impossible to prevent mass shootings, he added.

The carnage in Roseburg, Oregon was the 45th school shooting this year and the 142nd since the massacre at Sandy Hook elementary school claimed the lives of 20 small children in 2012, according to Everytown for Gun Safety.

Each shooting reopens the wounds for past victims.

"The hardest part is knowing it could have been prevented," said Yvonne Crasso, who lost her sister to gun violence in 2012.

"At this point everyone has blood on their hands," she told AFP. "Sending our thoughts and prayers are not enough. We as Americans need to be held accountable for inaction and for continuously voting for members of Congress who do not support common-sense legislation."

Andy Parker, the father of a journalist shot during a live broadcast in Virginia, blamed the National Rifle Association for blocking "reasonable safeguards" which could prevent "senseless tragedies" in a scathing op-ed published in USA Today Friday.

Experts say the gun rights organization has a lock on the debate because its members are simply more vocal and motivated than the so-called silent majority of Americans who support some level of gun control.

"The President was right to point out that many gun owners do not support the stances of the National Rifle Association, but those that do are the ones that write letters, show up at protests, and all the rest," Stephen Saideman, a professor at Carleton University in Ottawa, wrote in his blog.

At the heart of the matter is what Joan Burbick, a professor at Washington State University, describes as the nation's "hard-wired belief in guns."

"I do not think that many Americans want change," the author of "Gun Show Nation" told AFP.

"Every mass shooting only reinforces their belief that the world is a dangerous place and that their gun protects them from these dangers. They believe the gun is necessary."

There are however some long-term demographic trends which point to a shift in attitudes and the waning power of the gun rights lobby, said Gregg Carter, a professor at Bryant University in Rhode Island who has written several books about guns in American society.

Gun rights activists tend to be white Republicans while women, immigrants and people of color tend to be more likely to support both Democrats and gun controls: and their numbers are growing.

And while gun sales have been very strong for the past two decades, the overall rate of gun ownership is actually down, he added.