Is a New Palestinian Intifada at Hand? 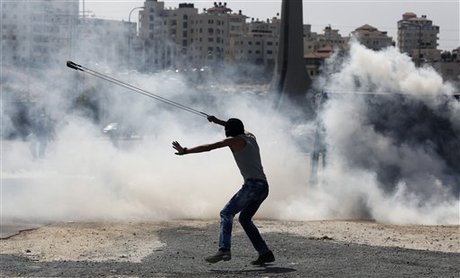 A new wave of violence has hit Israel and the Palestinian territories, prompting warnings of the risk of a third intifada similar to uprisings that began in 1987 and 2000.

Here is a series of questions and answers about the situation:

- Is this the beginning of a new intifada?

The risk certainly exists, but it is too soon to say whether the current violence in east Jerusalem and the West Bank will escalate into a broader uprising. The increase in unrest has coincided with the Jewish high holidays, and an important indication will be whether relative calm returns afterwards. The last of the holidays ends on Monday night, when the eight-day Sukkot festival draws to a close.

Spikes in violence frequently lead to talk of a new Palestinian intifada, and "today, after several days (of unrest), nobody can say that we are heading towards something that will last several years", said Nathan Thrall of the International Crisis Group.

The death toll so far -- 31 deaths linked to the conflict on the Palestinian side in 2015 and eight among Israelis, according to an AFP count -- is also far below the hundreds per year during the intifadas.

- Why has the situation become so volatile?

Palestinian frustration has mounted with efforts towards statehood at a standstill and Israel's occupation continuing. A recent poll showed that a majority of Palestinians favor a return to armed uprising in the absence of peace talks. There is also deep mistrust of and animosity towards Israel's government, one of the most right-wing in the country's history. Before March elections, Prime Minister Benjamin Netanyahu ruled out the establishment of a Palestinian state before later backtracking.

On top of that, the holidays result in an increase in Jews visiting Jerusalem's Al-Aqsa mosque compound, which they call the Temple Mount. Clashes have broken out at the sensitive site between Israeli police and Palestinian protesters. Beyond its religious significance, the shrine is also a symbol of Palestinian statehood.

Further adding to frustrations, the Palestinian cause has lost prominence internationally, with much of the world focused on other issues such as combating Islamic State group jihadists.

"The Palestinians have lost hope in reaching a political compromise and all doors are shut in front of them and their leadership," said Ali Jarbawi, political science professor at Birzeit University in the West Bank and a former Palestinian government minister.

- Where does the Palestinian leadership stand?

This is a major issue and one of the great unknowns. Palestinian President Mahmud Abbas said in his U.N. General Assembly speech last week that he was no longer bound by previous accords with Israel since the Israeli government was violating them. It is unclear, however, if his words will be translated into concrete action. Abbas's Palestinian Authority coordinates on security with Israel and any change to that could lead to chaos in the West Bank, according to some analysts.

Abbas's rival Hamas, the Islamist movement that runs the Gaza Strip, is busy attempting to rebuild after last summer's devastating war with Israel and it is unclear if it is prepared for more conflict.

- What could set off a broader uprising?

Ariel Sharon's visit to the Al-Aqsa compound in 2000 helped ignite the second intifada which lasted until 2005. The first intifada (1987-1993) was preceded by a gradual increase in tensions, with a deadly crash in the Gaza Strip the final spark.

In the current climate, clashes between Palestinians and Israeli security forces or Jewish settlers have the potential to spin out of control.

- What would keep the situation from unraveling?

Many do not want another uprising, including a large number of Palestinians weary from repeated conflicts. Some analysts say Abbas would prefer continued security cooperation with Israel as a way of shoring up his leadership at a time when two-thirds of Palestinians think he should resign. Much will depend on whether both Israeli and Palestinian leaders actively work to calm the situation -- and whether a new generation of Palestinians who may not feel beholden to Abbas or his allies responds to any such appeals.

- How has Israel responded?

Netanyahu, whose coalition holds only a one-seat majority, is under pressure from some rightwing members of his government to act more forcefully. He has declared "war" on stone-throwers and loosened rules for when officers can open fire. He also plans swifter demolition of alleged attackers' homes, broader use of detention without trial for suspects and police and troop reinforcements for Jerusalem and the West Bank. He has spoken of using restraining orders to keep "inciters" away from Al-Aqsa as well.

He must also be concerned about international pressure, including from Egypt and Jordan, the only Arab countries to have peace treaties with Israel.