Russia Carving out a Fortress for Assad, Say Experts 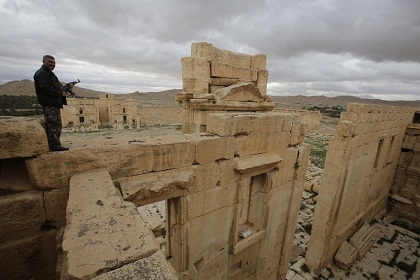 The contours of Russia's strategy in Syria are emerging as it tries to carve out a rebel-free zone for Bashar Assad's regime and shut out Western forces from his air space.

Although the stated aim of Russia's mission was to target the Islamic State (IS) group, most analysts have dismissed these claims as window-dressing for a campaign that primarily seeks to prop up Assad's embattled regime against a much broader group of rebels.

"The priority for the Russians is to protect 'useful Syria'," said Michel Goya, a military historian at Sciences Po university in Paris, referring to the densely-populated western and coastal parts of the country where Syrian industry and agriculture are concentrated.

He said the Russians' first priority was attacking Al-Qaida affiliate Al-Nusra, who are a more immediate threat in those areas than IS.

The few Russian strikes against IS targets are only to "justify their campaign but it's not really their priority," he added.

"The strategic objective is to secure an Alawite 'safe zone'... leaving the eastern, desert part of the country to (IS)," wrote Igor Sutyagin, of the Royal United Services Institute, in a recent analysis note.

Assad and much of the leadership come from the Alawite ethnic group based along the western coast, who fear they will be wiped out if jihadists take over the country.

Since the Alawites make up only 12 percent of the population, "control of the whole country is politically impossible and perhaps not even considered necessary for Damascus any more," wrote Sutyagin.

A U.S.-style air bombing campaign is a departure for the Russians.

Its 34 combat aircraft based in the Syrian government heartland of Latakia are a mixed bag of aging fighters such as the Su-24 and new advanced strike aircraft in the form of the Su-34.

But their missile systems are showing their age, lacking the high-tech "targeting pods" used by the U.S.

"All the systems we've seen the Russians use would be politely described as 'mature'," said Douglas Barrie, a military aerospace expert for the International Institute for Strategic Studies in London.

He said Russia has mostly been using unguided bombs dropped from medium heights, but its planes face limited threats if they need to fly low over targets.

"It's a comparatively permissive environment as the opposition have fairly limited air defenses -- mostly small arms, machine guns. Some of the rebels might have man-portable surface-to-air missiles, but not all of those will present a huge threat to Russian planes," said Barrie.

But unlike the U.S.-led coalition, Russia has a major intelligence advantage in the form of Syrian and Iranian ground forces.

"The key challenge in this type of conflict is finding decent targets. You don't deploy a fighter aircraft to blow up a pick-up truck," said Goya.

The other military advantage for the Syrians and Russians is that they care less than NATO forces about killing civilians, the expert said.

"A major part of intelligence is trying to determine the risk of collateral damage," he said. "If that doesn't bother you, things become much simpler."

"You can't allow a raid against Assad and his planes if there is the slightest risk of hitting the Russians also. There was talk of imposing a no-fly zone against Assad, now that's finished, it's dead," said Goya.

Turkey's interception of two Russian planes that entered its air space in recent days has raised concerns that Moscow is trying to block NATO and its allies from flying over Syria.

"I don't believe that this was an accident," a senior U.S. official told AFP on Monday. "This is exactly the type of non-professional conduct that we were hoping to avoid."

Only last week, the Pentagon and Russia held high-level talks on how to avoid accidents in the skies over Syria as both Moscow and the U.S.-led coalition carry out air strikes in the war-ravaged nation.

But analysts were skeptical that the incursions over Turkey were part of a wider plan by Russia.

"I would be surprised if the incident with Turkey was deliberate -- it was probably a navigational error by the pilot, lining up an attack and not paying attention to what air space he was in," said Barrie.

"It's in everyone's interests to make sure nothing untoward happens, especially given the cold relations between the West, NATO and Moscow."

lol what a bag of self-serving hogwash

"The other military advantage for the Syrians and Russians is that they care less than NATO forces about killing civilians, the expert said."

yea right, this is why the US just bombed an afghan hospital, and why they killed over two million iraqis since 1992, it's because they "care"

not to mention NATO turkey, who just used the pretext of bombing da3esh to actually strike jurdish villages all over turkey and syria.

Yeah, NATO bombs are for democracy, so all the civilians they killed in their wars were not illegal at all.